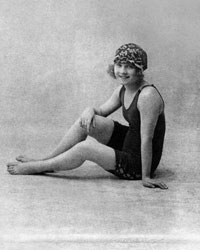 Gender roles began to alter slightly at the start of the 20th century. By 1920, women would have the right to vote. About a decade before that, they stopped being arrested for showing their legs and shoulders at the beach.

Part of what changed was that women started swimming -- really swimming. It was a competitive sport by this time, and women swam both in school and recreationally.

Accordingly, the bathing suit became more functional. It was still made of wool, but it was smaller. A bathing suit in the early 1900s was a one-piece, tank-style jumper that stopped at the thigh, and it was snug enough to allow for real movement in the water.

Sexy it was not, although it did look good on women with the boyish figure that was popular at the time. In the '30s, though, the popular shape would change, and it took the bathing suit along with it …