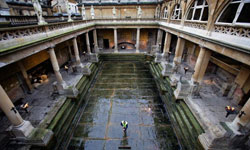 Lady bathers at Roman baths would have worn stylishly minimal bandeaus and briefs -- if they wore anything at all!
Matt Cardy/Getty Images

The bath houses of ancient Greece and Rome were not places of modesty -- after all, these were places to, literally, bathe. The more skin you showed, the cleaner you got. Men and women each had their own spaces, so cross-gender viewing was not an issue.

Women in these times, from about 200 B.C. to 500 A.D., most likely were either completely nude or wore a very small bathing suit consisting of a bandeaulike top and small bottoms. Drawings from these ancient civilizations depict women wearing these bikinis, which are very, very similar to those worn by women today. (So much for the "invention" of the bikini in the 1940s -- but we'll get to that later.)

The bath houses of ancient times gave way to the Dark Ages, when public bathing disappeared. The next time we see a bathing suit is in the Victorian era -- and it's barely recognizable as such.