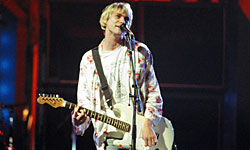 The ostentatious excess of the 1980s couldn't last forever, so, not surprisingly, men's fashion in the following decade was comparatively subdued.

Grunge became the rock'n'roll music and look of choice for many men in the early '90s. It was the antithesis of the 1980s: Instead of trying to look like flamboyant rock stars, grunge embraced -- if not reveled-- in normalcy. Jeans, long-sleeved flannel shirts and muted colors, such as green and brown, were everywhere.

Baggy clothing was also quite popular and could be found in everything from more loose-fitting button-downs at the office to the ridiculously saggy, derrière-revealing jeans donned by many men in the latter half of the decade (they were like bellbottoms that began at the backside and went all the way down). In fact, we got so tired of looking at men's boxer shorts in public that many local laws were passed across the country banning baggy pants.