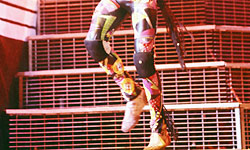 The 1980s was perhaps the loudest and most garish decade of the 20th century. Neon colors, bold patterns and leather pants were totally in vogue, and Michael Jackson gave legions of guys an excuse to sport one-handed gloves and wear sunglasses at night.

Rock 'n' roll's flamboyant turn made it acceptable for men to don brightly colored or animal-patterned spandex pants -- at least in glam-rock circles. Rock fans who weren't into pop-metal (or who chose to leave some things to the imagination) promoted their style through ripped jeans, often with multiple holes or tears (see Def Leppard's "Pour Some Sugar on Me" video to get an idea of what we're talking about).

However, not all men's '80s fashion was about excess. Don Johnson's wardrobe on "Miami Vice" led to a unique (and still cool) trend of wearing pastel colors and mixing casual and formal wear, making it chic for guys to wear T-shirts with sport coats and loafers sans socks. Polo shirts, argyle sweaters and khakis were also quite popular.