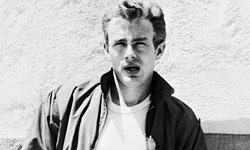 The United States was now a superpower, but you wouldn't know it by looking at U.S. men's fashion for much of the 1950s. Fear of being labeled a "red" caused guys across the country to stack their closets full of conformist brown, gray and black business suits, though by the end of the decade, cardigan sweaters, rolled-up sleeves and open collars had become quite popular, especially with teenagers and young men.

This was also the decade that the T-shirt moved from undergarment to article of clothing, in no small part thanks to James Dean's white tee and leather jacket combo in "Rebel Without a Cause." Many adults found the idea of wearing one's "underwear" in public to be profane, but plenty of guys did it anyway.