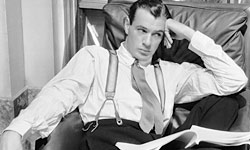 You might think men's fashion in the 1930s would echo the struggling economy, but the Great Depression actually made luxury suits more popular. Prominent movie stars, such as Cary Grant and Gary Cooper, could be seen on the silver screen dressed to the nines in attire that most men could never afford. Suits like the English drape were cut to accentuate men's shoulders and chests and often featured pants so high that belts couldn't be worn with them, making suspenders a necessary and in-demand item.

Lacoste introduced the original line of polo shirts, though it would be several decades before the style really took off.

Opulent suits and collared shirts weren't the only fashionable attire: Shirtless sunbathing came into vogue for the first time, and swim trunks made their related debut.