by Michelle Konstantinovsky
Prev NEXT
10

Americans love denim, but neither the word or the product got its start in the U.S. LaylaBird/Getty Images

Believe it or not, this one's a twofer. The term denim has roots in southern France, where twilled wool called serge was manufactured in the town Nimes. The product was known as "serge de Nimes," but in the late 1600s, English speakers began combining "de Nimes" into one word. By the mid-1800s, Americans were using the term to talk about the cotton fabric we now know as "denim."

The term "jeans" has foreign origins as well. Italy's Genoa (literally) made a name for itself by producing pants from a twilled cloth called "fustian." French people began calling the trousers "jene fustian" (aka, Genoese fustian), and by the early 1800s, good old English speakers had condensed the terms into the shorthand "jeans" [source: Kelly]. 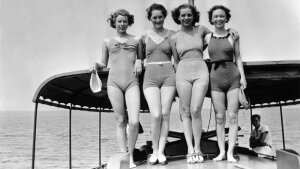