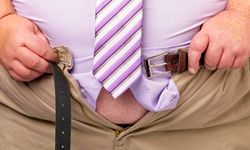 Sometimes good taste in clothes just isn't a guy's strength. Between going to work, keeping track of your favorite sports team, dating your girlfriend and playing with your pet, there isn't a lot of time to peruse the latest issue of the men's lifestyle magazine to see what's hip for the upcoming season.

If you're fashion challenged, you probably know it, and your significant other knows it, too. Just in case you haven't gotten the word about these 10 style no-nos, we're here to make sure you're in the loop. They'll peg you as a cretin a mile away, and if you're single, they'll also make you look a lot more like the court jester than prince charming. 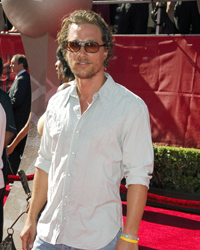 OK, Matthew McConaughey can pull off the sloppy look of wrinkles, but most men can't.
SGranitz/WireImage for ESPN/Getty Images

Looking like you slept in your clothes isn't fashion forward. It's also inappropriate for the office and will certainly not impress your date. If you take just a few minutes to iron your clothes and hang them up, then you'll always be ready to hit the town in style.

How will you know if your clothes need some attention from the iron? Well, if you dug your shirt out of the hamper this morning because you didn't have a chance to do the laundry (up all night playing video games?), it's going to be creased. It will also probably smell. If you want to look nice, take care of your clothes and make sure they're pressed. If you do plan on wearing a garment more than once before laundering it, hang it up.

A better option might be to have your shirts, pants and suits dry-cleaned. You get out of doing your own laundry, and they press your clothes for you before placing them on a hanger wrapped in plastic. All you have to do is pick them up and put them in your closet. While it may cost a bit more money than doing things yourself, the convenience factor makes it well worth what you spend. And, you're guaranteed a professional press job!

Laying on the Shine

Shiny suits and iridescent shirts can look loud and kinda cheap. Men headed out for the evening sometimes equate sheen with evening dressing, but when the sun goes down, quality men's garments in lush fabrics, like leather (not pants), cashmere, linen or fine wool make much more of an opulent statement than a lot of glitter.

By fashion standards, the average man's suit size is a 40 regular. 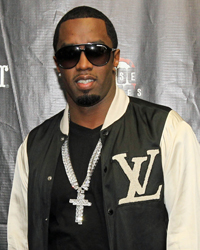 Unless you're performing on stage, let's leave the designer label logos to the rappers and rock stars.
Tom Briglia/FilmMagic/Getty Images

Both men and women make the mistake of letting the logo wear them rather than the other way around. The theory is that by showing off a huge, designer logo, you're showing the world that you can afford to wear said designer's clothes. Besides this being bad manners by bragging, it's usually just plain bad. If a prominent designer emblem looks like it might be too much of a good thing, tone it down or you'll end up looking more like a billboard than a style-savvy man about town.

Choose your pieces to showcase one or two quality items, and go for a flattering cut instead of a popular brand name. If you're wondering about the advisability of buying a shirt or other garment with a prominent logo, ask yourself this question: Is the designer going to give you a rebate for the free advertising? If not, then go for something that shows off your best assets, regardless of who designed it.

The same can be said for jewelry. You don't need to wear a diamond-encrused Mercedes symbol around your neck to show everyone how much money you have. Understated class is much more appealing.

Going for the Laugh 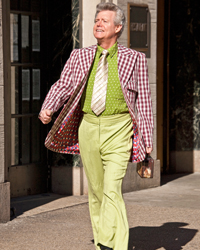 Choosing the funny tie, the T-shirt with the great slogan or a pair of bizarre shoes works some of the time, but if the usual response to your clothing style is a chuckle, make more of your choices about your fashion sense than your sense of humor. There isn't anything wrong with dressing fun -- it just isn't always appropriate to the occasion, like work or formal functions, for example. Funny can be fun, but looking good and getting the laugh aren't always compatible goals.

It's also important to use an editing eye when piling on several different colors. While there's nothing wrong with mixing and matching colors, you don't want to look more like a clown than a fashion-forward man. Choose one or two bright pieces and pair it with a neutral: black, brown, navy, tan, beige or khaki. And don't think that wearing one color head-to-toe will fly, either. A purple jacket, purple tie, purple pants and purple shoes will only get you the nickname "Barney!" Imagine if you saw the same outfit on someone else.

There probably isn't an adult alive who hasn't endured an afternoon in public wearing an outfit with a stain on it. There are some men, however -- you know who you are -- who insist on pretending a stain is invisible as long as a shirt, tie or jacket is in good shape otherwise. These guys will wear the offending garment week after week in the misguided hope that the spot will come out in the wash or magically disappear. News flash: This looks beyond tacky, and everyone who's seen the spot more than once has probably thought about mentioning it to you -- or to someone else.

To help with quick touchups at work, try keeping a stain remover pen in your briefcase or desk drawer. The sooner you catch a spill, the less likely it will permanently stain your clothes.

Wearing Clothes That Are Too Small

Nothing has the power to create more inappropriate giggles than a man wearing clothes that are too small for him. If your shirt or pants look more like sausage casings than apparel, then you're begging for a citation from the fashion police. If you've put on a few pounds, invest in some loose-fitting clothes until you can update your gym membership and work off those excess inches. Having to go up a size can be a bit depressing, but it's better than wearing red gouges around your waist from the contact points where your jeans have been digging in.

Getting older may have some hidden rewards for guys. Their thighs become slimmer and trimmer as they age.

Wearing Clothes That Are Too Big

We're beginning to sound picky, but it's true that going too far in the opposite direction and oversizing all your clothes is almost -- not quite, but almost -- as bad as wearing clothes that are too small for you. You aren't fooling anyone by adding miles of fabric to cover a beer belly. The best dressing fits your proportions. If your pant legs drag on the floor, your sleeves hang over your wrists or your collar droops, get some alterations pronto.

Hats seem to be one of those men's fashion accessories that come and go, but you'll always find diehards in any crowd who cling to their caps whether they're fashionable or not. Here's the deal: If you're wearing a hat in nice weather, indoors or too often, people will start to suspect that you're losing your hair. Hey, it may be a filthy and unfair rumor, but that's the risk you take when you rely on headgear to complete your look.

What you carry can make a big impact on your look, too. If your back pocket bulges with keys, a comb, a huge wallet and lots of receipts, your butt cheek may end up looking like it has a case of the bloat. Take an inventory and lose the excess. Your silhouette will thank you.

Wearing Too Much Flash 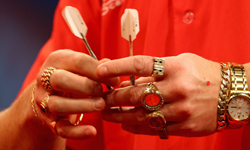 His hands must be awfully heavy with all the gold adorning them.
Phil Cole/Getty Images

Some women have a natural ability to layer on the baubles effectively, but guys have to use some caution when it comes to shiny jewelry. A watch, a tasteful ring and maybe one other piece (sometimes) should be plenty. Necklaces and bracelets on men can easily be too much. If you're going for the gangster vibe a'la the New Jersey mafia, then by all means, pile on the gold chains. But if you're looking for something a bit more subtle, pare down the jewelry -- a lot.

And don't oversize your choices or go for too much sparkle, either. There's a fine line between elegant and gaudy. If you cross it, you'll be risking a "lounge lizard" vibe that even your mom won't find attractive.

Why would you ever need socks with sandals? Sandals are for cool comfort and ventilation. Putting a thick layer of fabric between you and nature defeats the whole purpose. Dude, it's senseless and an all-around bad look. Seriously, if it's that cold out, just bite the bullet and put on a pair of shoes.

Only slightly less obnoxious than wearing socks with sandals is wearing white socks with dress shoes. Splurge on some nice dress socks to complete your look, and leave the white socks at the gym.