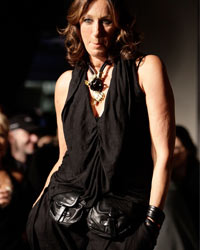 Fashion is cyclical. Trends come and go, many of them to be resurrected in 20 years and then forgotten again until the next go-round. Some fashions -- the little black dress, for example -- are timeless. Others -- like poodle skirts, maybe, and shirtwaist dresses -- looked cute back in the day, but they're definitely relics from the past.

And then there's the black-sheep category: stuff that never looked good in the first place.

Many of the 10 items on this list have mercifully died and gone to fashion heaven, never to be seen again, but some have insisted on lingering well past their expiration dates. If you actually wear any of these things -- or if you've stashed them in your closet, waiting for the moment they make a comeback -- please, do yourself a favor and get rid of them immediately. Come on, you know what we're talking about. Just have a look in your closet -- right, keep looking, go to the very back. And there it is.

Yes, yes, we know -- you're going on vacation and you absolutely must have a fanny pack so you aren't robbed while you're sightseeing. You need to have all your belongings strapped to your waist so you can have your hands free to work the enormous camera that will be hanging around your neck, right?

Stop right there. Take a deep breath, and take it from us: No one needs a fanny pack. You'll not only look totally dumpy with a pouch hanging from your stomach, but you'll probably get robbed to boot because a fanny pack is the international sign for "tourist." So, put your valuables in a flat bag around your neck (and under your shirt) and sightsee away, knowing that you're safe from pickpockets -- and the fashion police.

There's nothing wrong with platform shoes -- we're all for being stylish and achieving a much taller look at the same time. In fact, we'd dare to say that every woman should have a nice platform wedge in her closet. But platform sneakers? Nah -- not so much. There's really no way to pull off a platform sneaker without looking like you should also be wearing a curly orange wig and a red plastic nose. They might have had their place among sixth-graders (or ravers) in 1992, but this is one trend that should stay firmly in the past.

The ridiculously high foot creations in Alexander McQueen's 2010 spring collection probably won't be catching on with the masses anytime soon. We'd like to watch someone try to get through the day in the 10-inch, bejeweled lobster-claw shoes.

It's a strange phenomenon -- go to any pro bike race or tennis tournament, and half the spectators will be clad in cycling jersey or tennis skirts. Clearly, they haven't just completed a grueling road race or five-set match, so why the athletic gear? We'd ask the same question of people who insist on walking around in track suits. Are you about to participate in an actual track meet? Are you a member of Run-DMC? No? Then leave the nylon at home, please. You're not fooling anyone.

Another bizarre phenomenon, which seems to occur in people of a certain age, is matching couples' outfits. Is it just us, or are the matchers in question often clad in track suits?

Nothing says "idiotic early millennium hipster" quite like the trucker hat. Cocked to the side, preferably emblazoned with an ironic saying, maybe paired with a pair of thick, black-framed glasses, it's the calling card of posers everywhere.

Trucker hats might have had their moment back in 2000 or so, when they were confined to an incredibly hip neighborhood in Brooklyn or somewhere -- but when you can buy an item at a mall kiosk, guess what? It's not hip anymore. And Paris Hilton has worn them, for goodness' sake. They clearly jumped the shark years ago, so let's put trucker hats to rest -- until the next generation of hipsters unearths them in 2036.

If an item of clothing is best worn only by people with perfect bodies, that's pretty much the definition of a fashion don't. Crop tops are a perfect example. Unless you have washboard abs -- and let's face it, who does? -- you should not be wearing a crop top. Period. When a shrunken shirt is paired with ill-fitting bottoms (as they all too often are), we experience the creation of the dreaded muffin-top: just about the worst fashion crime you can possibly commit. And really, even the most hard-bodied should not be wearing crop tops -- it's not 1988 anymore.

Fads may come and go, but every woman knows that you need to have a little black dress in the closet at all times. The LBD is one item that will probably be with us until the end of time, and we're totally OK with that.

We couldn't have said it better ourselves, Gen. Larry Platt. All of the items on our list are egregious fashion crimes, but droopy pants are the only one that could possibly be an actual crime -- lawmakers in several states have actually tried to outlaw them. They can also be hazardous to your health: an alleged murderer in New York City fell to his death when he tripped over his saggy pants while fleeing police. So why are droopy pants still alive? It could be the pure exhibitionist's pleasure in having everyone see your skivvies. Maybe it's the thrill of a challenge -- walking around with your pants belted around your knees is surely no easy feat. Whatever it is, it doesn't look like droopy pants are going away anytime soon.

Crocs are yet another unsightly item of clothing whose wearers constantly invoke the "but they're so comfortable!" defense to justify their glaring lack of all fashion sense. OK, yes -- they might be comfy. But that doesn't mean you have to wear them. Go ahead, put Crocs on your kids, but mark our words: If you slip on a pair of these odd, perforated foam clogs, you're going to look like a giant Oompa Loompa. Might as well complete the look with orange skin, a green wig and white overalls.

And speaking of overalls ...

The trusty Converse All-Star (better known, of course, as the "Chuck") is the rare example of a shoe that really never goes out of style. They've been around, amazingly, since 1917 and have rarely disappeared from the fashion radar. We're all for a good closet purge every now and then, but always hang on to your Chucks.

Overalls are comfy. They hide a multitude of bodily sins and make you feel all cute and cozy, like a little kid. Unfortunately, they also make you look about 20 pounds heavier than you actually are -- and like a little kid. Trust us; this is not a good combo. The only people who should legally be wearing overalls are the under-3 set and farmers. In fact, we're going to go out on a limb here and recommend that even if you do happen to be a farmer, maybe you should ditch the overalls. There's no reason you can't look good while you're milking the cows.

We were going to start this blurb with a short note of thanks that acid-washed jeans are one terrible '80s fad that have not yet graced us with a comeback. But we've been forced to eat our words. A quick Google search revealed a plethora of acid-washed atrocities for sale -- and from the looks of it, the engineers of this dastardly new trend are targeting poor, innocent children and teens. What parent who lived through the '80s would buy a pair of purple acid-washed skinny jeans for his or her son? We don't know, but if we find out, we're reporting you to the authorities.

Well, we thought we had seen it all -- but now we take that back. Apparently, some people have decided that the pain of an actual corset isn't enough for them, and they've started piercing their own backs and lacing ribbons through the holes. We have no words. 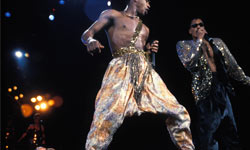 Funky lyrics and fresh new kicks aren't even enough to make these pants work. And no, Mr. Hammer, we don't want to touch this.
Mick Hutson/Redferns/Getty Images

Hammer pants are a fashion trend so truly bizarre that we're sure we imagined them. Did people (men, no less!) really walk around in the early '90s in baggy pants with enormous, draped crotches that sagged to the knees? Surely that must have been a bad dream. But then we'll come across the "U Can't Touch This" video on VH-1 Classics or something and realize that yes, it did really happen -- and they're just as heinous as we remembered.

We did hear a rumor that Hammer pants were making a high-fashion comeback as "harem pants" in 2009, but we ignored it in the hopes that it wasn't really true. Because let's get one thing straight: It's never Hammer time.

For more dreadful fashion blunders, break it down on the next page.