by Gallagher Flinn
Prev NEXT
3 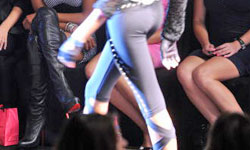 Leggings are still lurching down the runway.
Stephen Lovekin/Getty Images for IMG

It's great when a pair of pants both looks great and feels comfortable, but we don't like where some of this is heading.

Jeggings and pajama jeans, we're looking in your direction.

Though they've been around since 2009 or so, fake elastic jeans, with their unstoppable combination of colossally bad taste and endless popularity in the face of widespread ridicule, have earned them a spot on our list. These pants have the marks of tomorrow's trash bins all over them -- cheap, fake, synthetic and ubiquitous. While we wish we could say that they've jumped the shark already, they're certain to be highly visible during 2011.