10 Fashion Lessons We Can Learn From Joseph Gordon-Levitt 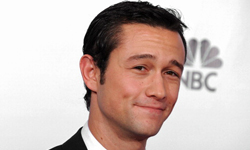 Actor Joseph Gordon-Levitt has turned into quite a fashion inspiration.
Kevin Winter/Getty Images

Joseph Gordon-Levitt is a fashion success story. From an awkward teenage alien ("3rd Rock from the Sun") to a love-struck young professional ("500 Days of Summer") to a suave dream agent ("Inception") and beyond, he's managed to pack a lot of variety into his career. Through his many adult transformations, he's retained a distinctive but unconscious sophistication, even when he's after a laugh. His cool and sometimes quirky choices make you want to see what he'll come up with next, and he seldom disappoints. Men want to look like him, and women want to learn his secret so they can inject some sass and shrewd fashion sense into their man's wardrobe.

On the next pages, we'll explore 10 ways Joseph Gordon-Levitt makes fashion his own. His misses are minor, and his hits are dead on.

Men can look super stylish when they learn one of Joseph Gordon-Levitt's basic but important secrets: Find the right size for your body style and insist on a good fit. Visit a tailor or grab a measuring tape and get the facts straight. Oversizing shirts and pants to conceal flaws like narrow shoulders or love handles doesn't fool anyone. You'll just end up looking sloppy. Good tailoring makes the man.

Joseph Gordon-Levitt (born Joseph Leonard Gordon-Levitt) made his screen debut in the film "A River Runs Through It" as the young Norman in 1992.

Joseph has mastered the knack of mixing patterns and colors to create a finished look. There are a couple of tricks to making checks, plaids, prints and solids work together. Here it is: If you're using multiple patterns, keep the scale, the overall size of the designs, similar. If you are using color to make a statement, go ahead and match or contrast pieces, but take care that the elements you choose share something in common like value (lightness and darkness) or color family (their proximity on the color wheel). 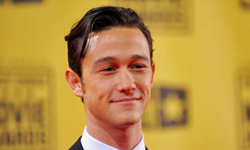 Whether longer or super short, Gordon-Levitt knows what haircuts work for him.
Jason Merritt/Getty Images for VH1

During his early years, his hair may have looked a little long and messy. We'll even concede that a center part may not be his best look, but Joseph definitely has the hair thing down now. Whether it's a little longer, wavy and tousled (and very touchable) or cut close to his head, his hair styles complement his expressive features, balance his jawline and ears, and contribute to his classic profile. Hair trends change from season to season, so being flexible is a good idea, but your hair should suit your face. The next time you have your hair styled, ask for some professional suggestions instead of going with the same old thing.

Joseph has a definable look most of the time. It's tailored, often layered and always coordinated. That doesn't happen by accident. He's discovered that vests, V-neck sweaters, jackets with narrow lapels and pants with an impeccable drape and break in front really work well for him.

Experiment with your style until you have a good sense of what works for you, too. After that, add a couple of new, trendy items that speak to your strengths every season as fashions change. That way, you'll have a flattering wardrobe and still keep everything fresh. 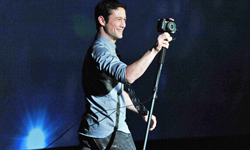 For his role in "Hesher," Joseph underwent a pretty astonishing transformation. Wearing a scruffy beard and long, stringy hair, he looked thin, dirty and uncharacteristically unkempt. As a social misfit, he put in an effective performance, but we can also look at his portrayal another way. It's a cautionary example of the value of good grooming. There's no doubt that fashion works from the skin out. Keep your hair trimmed, your teeth white and your nails short. Oh, and get clean and stay that way. If your date can smell you coming, it won't matter much what you're wearing.

Coming in at around 5 feet, 9.5 inches tall, Joseph Gordon-Levitt is average height. He makes the most of his inches by adopting perfect posture, though. Watch the way he moves, stands and sits. His back is military straight and his shoulders are pulled back. You can often see a slightly upward tilt to his chin that helps create a straight, clean jawline, too. If you want to look good when you're out and about, don't slouch -- stand up straight. This is one secret of good dressing you just can't buy. 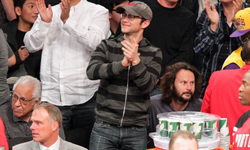 He even makes casual look good while cheering on the Los Angeles Lakers.
Noel Vasquez/Getty Images

We love him in a suit, but Joseph looks his most relaxed and approachable in a pair of straight leg jeans. Although he has a lean frame that really shows well in jeans, the lesson here is that the right jeans can be your go-to garment for a great look day or night. Avoid baggy styles, and go for a straighter leg if you want to add a little height. Jeans paired with a jacket, vest, sweater or hoodie can look and feel spectacular.

Invest in a Good Suit

As Arthur in "Inception," Joseph's slicked-back hair, immaculately tailored wardrobe and economy of movement help create an aura of mystery and danger. In his off-camera suit choices, he's inclined to go with a little less flash but is careful about selecting suits that fit his narrow frame well, especially at the shoulders and cuffs. This is another instance where a quality garment and careful tailoring can be your best friends. 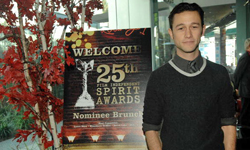 A sweater over a shirt and tie never looked so good.
Duffy-Marie Arnoult/WireImage for Film Independent/Getty Images

You'll notice that the overall look Joseph goes for is usually so well integrated you don't flash on any one element. You don't think, "Hey, great shades." or "Wow, I love that sweater." It all looks right -- together. The result: You see Joseph Gordon-Levitt front and center. He's full of personality and kinetic energy, and his clothes create the right backdrop for his crooked grin and soulful stare. Take a look at his tie widths and shirt collars. You won't find unsightly gaps, and the separate layers combine expertly. Good dressing is about getting the details right.

Get Comfortable in Your Skin

Actors learn how to move well, but even in repose, Joseph just seems to look comfortable in his clothes. That confidence adds another level to his ability to wear fashion well. He's careful to choose the right clothes, sure, but once he's dressed, there's no mistaking the fact that he's in charge. He probably wasn't born exuding casual grace, though. Coming to terms with fashion as a form of personal expression is a process. At some point, Joseph Gordon-Levitt -- chic geek and snappy dresser -- decided that style was a tool he could use to his advantage, and one he could also relax and enjoy.