10 Fashion Lessons We Can Learn From Britney Spears 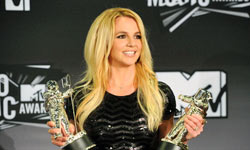 When 17-year-old Britney Spears burst onto the pop-music scene in 1999 in braids and a skimpy schoolgirl uniform, quite a few people thought that the world might have found itself a new fashion icon. She was a fresh face -- an innocent, bubbly teenager with a bit of a naughty streak -- and girls around the world instantly latched on to her unique fashion sense.

Unfortunately, it's been a bit of a rough road since then for Britney -- fashion and otherwise. She played the America's sweetheart role for a little while, but then was suddenly not-that-innocent. She had two kids, made a whole bunch of questionable decisions, and her career died and was resurrected at least twice. Her entire life became tabloid fodder -- and her fashion choices still made news, but usually for all the wrong reasons.

But even though Britney is a bit of a train wreck in the style department, she still has much to teach us. We can learn plenty of lessons from her fashion missteps. Just to be clear, here: These are lessons we can learn from Britney -- but not, for the most part, lessons she actually follows. But we have hope that she'll turn things around and reinvent herself, yet again. 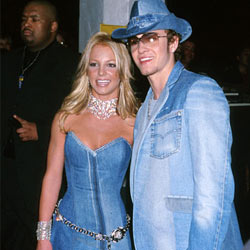 Most people know not to double up on denim -- you should never wear a jean jacket, for example, with a matching pair of Levi's. And even if you do commit this fashion crime, you absolutely do not put your boyfriend in the same outfit. Britney apparently hadn't gotten the memo back in 2001, when she wore a denim ball gown to the American Music Awards -- and then-flame Justin Timberlake showed up in a denim suit and cowboy hat. We'll just chalk it up to youth.

Britney has always loved to talk about her music and style influences, and she'll often use an outfit to tip a hat to one of her idols. She famously paid homage to Madonna by donning a white lace wedding dress -- veil, flowers and all -- to perform "Like a Virgin" at the 2003 MTV Video Music Awards. You can be a little more subtle about it, but it's always nice to pay a fashion tribute to someone who's inspired you.

After Britney performed "Like a Virgin" at the 2003 MTV Video Music Awards, she and Madonna shared a now-infamous open-mouth kiss. You obviously don't need to go this far. 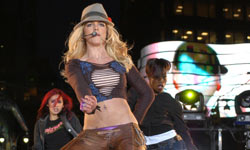 Whether on stage or being a mom, Britney's always rocked a good hat.
KMazur/Getty Images

Every star who takes fashion risks has a signature item, and Britney's might be the hat. For better or for worse, the girl loves a chapeau, from fedoras and cowboy hats to newsboy caps and leather biker lids. Sometimes the hat sends an already outlandish get-up completely over the top, but every so often she gets it just right.

During Britney's drug-fueled "rough patch" in 2006, we watched as her behavior became more and more erratic and her fashion choices increasingly bizarre. And then, one night in February 2007, she did the unthinkable. She shaved her own head. On camera. You would think it was a rock-bottom moment, and in a way it was, but Britney did seem to slowly get better after that. She was free without all those bad weaves dragging her down. We wouldn't advocate such a drastic move as head-shaving, but the next time you're in a fashion (or life) rut, think of Britney's bold move.

Just a few days after shaving her head, Britney made an unfortunate accessory choice when she attacked a photographer's car with an umbrella.

In a famous piece of fashion wisdom, Coco Chanel advised women to inspect their ensembles in the mirror and then remove one accessory before leaving the house. Britney has always had a hard time with this concept. Where one belly chain will do, she'll wear three -- and then add a fedora, beaded choker, elbow-length gloves and purple sunglasses. But she can also look stunning without all the bling -- and so can you.

The Long and the Short of It

This lesson also holds true for hair extensions. Keep it simple -- there's usually no need to invest in 3-foot weaves.

Every starlet has experienced a wardrobe malfunction at one point: going braless at a formal event, for example, or sporting a skirt that's just a wee bit too short. Britney has had her fair share of these moments. But more than once in recent years, she has left the house for an evening of partying and forgotten her underwear -- and then has inadvertently revealed this fact to the world by immodestly exiting from a car. This might not be a problem if you don't have paparazzi following your every move, but just be safe and keep yourself covered.

4: Show off Your Curves 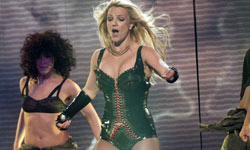 The girl's got a body, and she's definitely not afraid to show it off -- ever.
Araya Diaz/Getty Images

Britney has never been one to shy away from a skimpy outfit. If it sparkles, has fringe and involves less than a half-yard of fabric, chances are she's putting it on. More often than not this strategy leads to disaster, but every once in a while she knocks it out of the park. When she's in fighting shape -- with fantastic cleavage, rock-hard abs and dancer's derriere -- Britney can rock a barely-there ensemble like nobody's business. So, we say, if you've got it, flaunt it. 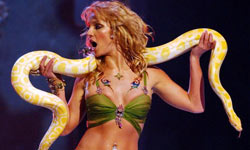 We still haven't gotten over this attention-grabbing look Britney sported at the 2001 MTV Video Music Awards, but we certainly wouldn't recommend this one for anybody.
KMazur/Getty Images

Britney took the stage at the 2001 MTV Video Music Awards wearing a green bikini top, diamond bellybutton ring, bejeweled short-shorts adorned with flowing scarves ... and an enormous albino python. Attention-grabbing as the look was, we wouldn't recommend it for everyday, and not even for special events. If it breathes and can move, just leave it at home -- or at the zoo.

Here's a public service announcement for our readers who regularly stroll red carpets and find themselves being chased by the paparazzi. Do yourself a big favor and hire a stylist. If you employ someone to dress you tastefully, you'll avoid a lot of pain, heartache, Internet scorn and worst-dressed lists. By all appearances, Britney hasn't heeded the advice of a stylist since about the late '90s. Need we say more?

For her 2004 wedding to Kevin Federline, Britney wore a $26,000 strapless Monique Lhuillier gown.

1: Be True to Your Makeup Artist 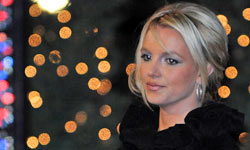 No matter how outlandish her outfit, Britney usually has fabulous makeup -- and we give her kudos for that.
James Devaney/Getty Images

Even on her worst fashion days -- and there have been many -- Britney usually has fabulous makeup. We're guessing that she doesn't do her own cosmetic work, so let's assume that credit is due to an excellent makeup artist (or team of them). We realize that most of you don't have your own makeup artists, but we definitely recommend springing for one if you have the means. That way, even if your outfit is questionable, your face will always look fantastic.