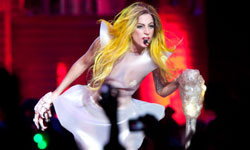 What can we learn from Professor Gaga?
Chelsea Lauren/WireImage/Getty Images

Like a tornado, Lady Gaga whirled onto the international pop music scene in 2008, sweeping up phenomenal sales and numerous awards.

But music isn't her only game. She's had an impact on the fashion scene, too, with her ever changing, no-limits wardrobe full of costumes and props. For the past few years, most of these have been created by her Haus of Gaga design business.

So, is there anything you can learn from Lady Gaga? Here are 10 fashion lessons from the Haus of Gaga that you can take note of. 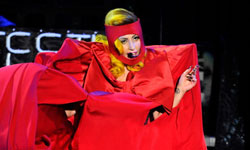 Lady Gaga isn't your typical fashion model. She stands only 5 feet 1 inch tall without shoes. Yet she pulls off some amazing shapes.

Oversized, rectangular shoulders are features of several outfits. In at least one, the shoulders are level with the top of her head. She'll also exaggerate her hips with rectangular skirts. Sharp-edged triangles adorn stiff, shiny costumes and black leather jackets. To add a few inches to her height, sometimes her hair will rise up in a conical shape above her circular sunglasses. But not everything's boxy and square -- spheres work, too. The lesson: Everything you need to know about fashion you learned in kindergarten.

9: Hair Dressing Doesn't Mean What It Used To 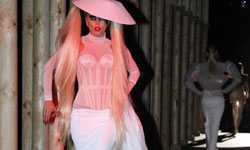 Lady Gaga doesn't see the need to keep hair so close to her head -- or stop with her own hair. She takes the ancient hair shirt to new lengths with a dress made of braided blond locks and a frizzy hair skirt. Another hair dress is more along the Lady Godiva lines -- strategically draped and belted. Hair shows up in other outfits as a monstrous head dressing.

She's creative with her own hair, too. A natural brunette, Lady Gaga dyes her hair platinum blond, but frequently tints parts of it with crayon colors. She's turned it into an actual hair bow, a sun hat, and countless other shapes. The chemicals are damaging, though. Gaga says she misses her natural color because her blond hair is falling out. Fashion lesson: Treat your tresses tenderly, or they'll be hair today, gone tomorrow.

8: The Sky Is Not the Limit

Gaga takes her fashion inspiration from nature, drawing from the sea, the land, and the cosmos. Her outfit for the 2010 Grammy Awards was a Giorgio Armani dress with stiff orbital trails ringing her body. A constellation headdress and stardust hosiery completed the outfit. One of her costumes in the "Bad Romance" video looks like a cross between a lobster and a praying mantis. She's also taken floral prints to new dimensions -- the third dimension -- with a dress of silk flowers sewn onto black fabric.

Lady Gaga's first fashion inspiration was her mother. She's also partial to Versace and vintage Chanel -- fashions that symbolize a lifestyle. Andy Warhol's creative collective "The Factory" has a strong influence on her design teams at Haus of Gaga. 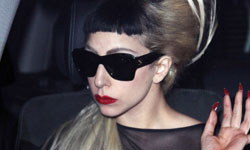 We tend to think of accessories as a purse, a belt, a bangle and maybe a scarf. But they can be so much more! Masks aren't just for Halloween and highway robbers. They're for a night out on the town, too. If that's too bold, wear vintage sunglasses -- even when you're not in the sun. Top off your look with a hat (or a crustacean, telephone or T-bone steak). If your outfit doesn't have quite the dynamic you hoped for, slip on a pair of biker gloves, elbow gloves or a single ripped glove. Still not enough? Top your fingernails with tiny wire cages. And don't forget your vampire fangs!

Lady Gaga shows us it is easy being green -- with a jacket and headband made from Kermit the Frog stuffed animals. For another dress, a giant Muppet monster head found new life as a skirt. Muppets aren't just for hands anymore.

Out-of-date disco balls get a second chance, too. The shiny, mirrored squares can be transformed into masks, bras and reflective, angular dresses.

And why be original when you can borrow looks -- or even parts -- from other celebrity icons. C-3PO, check your metal body!

When a London reporter referred to Lady Gaga as an icon, she replied, "People use that word too carelessly. I mean, don't just hand it to me on a plate because I dress cool. Make me earn it."

Hem lines go up, hem lines come down. We've seen the super long and the super short and every length in between.

There's nothing new in skirts -- unless you think vertically. Lady Gaga did just that, coming out with a skirt that only covers the right side of the body. Fashion lesson: Falf a skirt is better than none.

Vertical lines also help those of us with tinier frames look a little taller for the camera, something Gaga has mastered.

Lady Gaga is the creative director for Polaroid. In January 2011, the company launched the Grey Label line of products, including an instant mobile printer, an instant digital camera and camera glasses.

Tall, weird, colorful and crazy, Lady Gaga seems to live for shoes. High heels help you rise above the crowd and pick up a slinky walk.

In Lady Gaga's world, though, most body coverage extends from the toes to the knees. Her everyday attire consists of a leotard, fishnet hose and footwear. If there's more material in your outfit than in your boots, you're overdressed.

Lady Gaga once said she couldn't live without fake eyelashes and high heels. Now she's forgoing the eyelashes in favor of eyeliner, stating that she thinks the look is more modern.

3: The Right 'Cut' Is Everything 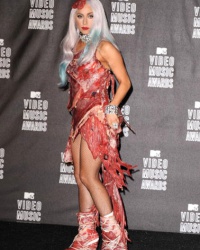 2: Go On the Offensive

Madonna made a statement -- fashion and political -- with her torpedo bras. Lady Gaga goes a few steps farther with fully armed brassieres.

In her "Bad Romance" video, she barbecues an errant boyfriend with a flame-throwing bra. In another video -- and on the cover of Rolling Stone magazine -- she dons a machine-gun bra. The fashion lesson: When taking the offensive, two barrels are better than one.

Lady Gaga is out to reinvent pop music. She draws inspiration from Madonna, Elton John and Michael Jackson. She's also influenced by the glam rock styles of David Bowie and Queen. 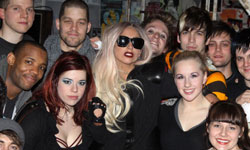 Lady Gaga isn't just about music, and she isn't just about fashion. She's about the total image. She says on her Haus of Gaga Web site, "When I'm writing music, I'm thinking about the clothes I want to wear on stage. It's all about everything altogether -- performance art, pop performance art, fashion. For me, it's everything coming together and being a real story that will bring back the super-fan."

It isn't enough that she's built a music brand and a brand of uninhibited, avant-garde, risk-taking fashions. Now, Gaga wants to teach. She's applied for an adjunct professor position at Manhattan's prestigious Parson's School of Design. A college dropout herself, she'd like to teach fashion design students for a semester or two after her Monster Ball Tour ends.