10 Fashion Lessons We Can Learn From Katy Perry 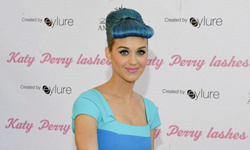 Katy Perry definitely isn't afraid to take risks, and that's a lesson we all need.
Michael Kovac/Getty Images for Eylure

Since Katy Perry came on the scene in 2008, she has been quite a conversation piece in the fashion world. Her signature style borders on outrageous, but she can also dial it down to demure and wear couture well for red carpet events. Whether you love her or leave her, you've got to admit that the girl's got gumption. Anyone whose wardrobe can go from glam to garish in the click of a stiletto is someone worth watching. Here are 10 fashion lessons we can learn from Katy Perry.

If we can learn any single lesson from Katy Perry, it's that we can have fun with our clothes and not take the whole fashion thing too seriously. In fact, many of her wardrobe choices laugh in the faces of fashionistas everywhere. Who else would show up to an MTV Video Music Awards show dressed in half a man's suit and half a woman's dress? With makeup and a hat to match, natch.

The first video to ever air on MTV was "Video Killed the Radio Star" by the Buggles.

9: Find Your Own Style 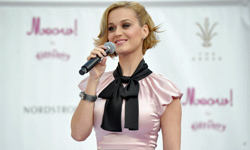 She still keeps a retro vibe when she goes a little bit more classic.
John Shearer/Getty Images for Gigantic

Katy Perry's fashion choices are unique and very much a statement of her own individuality. A great lesson here is to find your own style that suits your body as well as your personality. Before Katy became best known for her over-the-top costumes, her wardrobe choices leaned toward vintage, often stepping into pin-up girl territory. She wore these looks well because the clothes suited her hourglass figure and her pale skin. So, while it's tempting to hop on the latest fashion trend, sometimes it's better to stick to what we look best in.

Katy Perry is known for her colorful costumes and she really doesn't seem to have any rules for what goes together and what doesn't. Her wardrobe color palette seems to live in the spirit of a lollipop, favoring a mix of bright colors as well as pastels. In Katy's world, bright green, bold blue and hot pink live together beautifully in a single outfit, and it's not uncommon for her hair to match. While making such a bold statement probably isn't in the cards for most of us in our day-to-day wardrobe, she's definitely shown us that pop of color lends some fun to an outfit.

Will the Real Katy Please Stand Up!

Katy Perry was actually born Katheryn Elizabeth Hudson. She performed for a while as Katy Hudson but eventually changed her last name to her mother's maiden name so she wouldn't be confused with the actress, Kate Hudson. 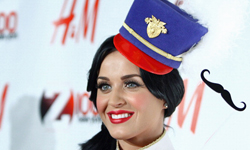 Katy Perry has definitely shown us how fun it is to accessorize; the girl loves the opportunity to embellish an outfit. From flowery hats to heart-shaped sunglasses, rarely does Katy sport an ensemble that doesn't have some sort of fun flourish. She's even been known to rock a parasol now and again. Even if you're relegated to boring old monochromatic pantsuits for your work wear, don't be afraid to dial it up a notch with a fun belt or purse.

From her snowman dress to her nutcracker outfit, Katy is often straddling the line between amusing and absurd. It's not uncommon to find her in pink leopard from head to toe or wearing a hair bow that's twice as big as her head. She once attended a Teen's Choice Awards in nerd glasses, head gear and a washed out denim jumpsuit and even showed up at her 24th birthday party dressed as Freddie Mercury, moustache and all.

Katy's outfits typically serve to pack a punch, but the danger with being outrageous all the time is that the wow factor wears off and you end up always trying to outdo yourself. We have to admit, though, we do love the costumes she wears during her stage act.

Speaking of outrageous outfits, the press is still talking about Björk's infamous swan dress that she wore to the 2001 Oscars. 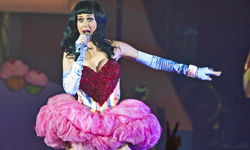 Perry loves the bustier top that shows off her assets.
Neil Lupin/Getty Images

Even if you don't love her style, you've got to admit that Katy Perry has a killer body. She was particularly blessed in the bust department and she isn't afraid to show it. What can we learn from this? Dare to make some fashion choices that show off your best assets.

If you're finally benefitting from years of crunches, find a fun shirt that bares a little midriff. Were you graced with gorgeous gams? Allow your hemlines to get a little shorter. Sculpted arms and shoulders deserve a racer-back style sundress. And so on.

Yes, we just encouraged you to show a little more skin when the occasion is appropriate. But baring too much skin can take you from slick to sleazy, and fast. Some ways to achieve this are to offset the more naked end of your outfit. For example, if you're going tight on top, consider lowering the hemline a little more than usual. Short skirts are nicely paired with long sleeves, or a shirt that's a bit more blouse-y. No matter how hot your bod is, it's never a bad idea to leave something to the imagination -- a choice that Katy doesn't always make.

The word sleazy originally meant thin or flimsy and didn't become the term for a person with low moral standards until the late 1960s.

Katy Perry obviously has a much larger wardrobe budget than the average Josephine, but many of her looks could be achieved for a lot less money. The way to do this is to mix a few high-end pieces with much more affordable basics. Splurge on that designer dress that you can't live without, then accessorize with costume jewelry or a fun belt from Target. Or, buy the cute but inexpensive shift dress from Old Navy and rock it with your best Louboutins.

Even someone who's known for her outrageous style appreciates the opportunity to dial it down on occasion. Katy Perry has proven that she can wear red carpet couture just as readily as confection-colored frocks. She's been dressed by some of fashion's best, such as Christian Dior, Elie Saab and Alexis Mobille. This means ditching the neon blue wigs and dyed pink locks in favor of monochromatic up-dos. Take note and don't be afraid to switch up the jeans and T-shirts for a fancy dress occasionally.

Christian Dior's namesake passed away in 1957, but the label continues to be one of the leading designer brands on the runway because of other, well-known designers who have helmed the fashion house, like Yves Saint Laurent and John Galliano. 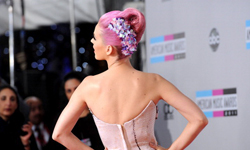 Pink is just one of the many colors Katy has rocked during her career.
Jason Merritt/Getty Images

Katy Perry's natural hair color is blonde, but you'd never know it from the rainbow of colors she has sported on her head. Though she seems to always go back to black, more recently she's been wearing bright blue and hot pink do's, which we feel are best left to experimental teens. But she's also been a blonde, a redhead and everything in between, and she's worn them all quite well. The key to changing up your hair color is to make sure you choose the right tone for your skin color and then change your makeup colors to match.