by Beth Brindle
Prev NEXT
5

Don't Be Afraid of Bright Colors 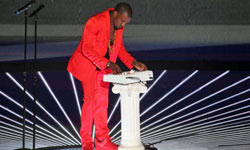 Kanye's definitely not afraid of bright colors -- this red suit he wore at the 2010 MTV Video Music Awards was so bright it was dubbed "infrared."
Jeff Kravitz/Getty Images

His spring and fall fashion collections featured lots of looks in tans, browns, white and black, but in his personal wardrobe, Kanye flaunts his flair for color. The suit he wore to perform at the 2010 MTV Video Music Awards was a red so bright it was dubbed "Infrared," though it appeared neon pink when the stage was darkened. Combined with a black t-shirt, gold chains and a pair of bright red Louis Vuitton sneakers, it was an outfit you couldn't miss even if you wanted to.

Kanye has been known to add his own touch to a camel colored Prada suit by adding a bright orange t-shirt and a dazzlingly white pair of sneakers. So how does he pull off all these eye-catching colors without turning into a fashion "don't"? It's similar to the principle interior designers use when choosing the colors for a room: just about any shade becomes a neutral backdrop if you use enough of it. Whenever Kanye goes bright, he tends to go with one color from head to toe. Alternately, he wears a neutral shade, then accessorizes with a bold color - sort of like adding a bright throw pillow to a neutral couch.

Of course, no outfit of Kanye's would be complete without attention to the next lesson on our list.