by Beth Brindle
Prev NEXT
6

Do Mix it Up 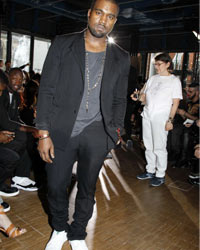 Kanye's sneakers are a staple of his wardrobe, and he frequently pairs them with dress pants and suits.
Eric Ryan/Getty Images

We've already acknowledged Kanye's ability to rock a Tt-shirt with a suit, but that's just one of many combinations he pulls together with style. Most of us wouldn't attempt to wear a denim shirt or jacket with denim jeans unless we were heading to an '80s party, but Kanye manages to keep the styles and colors on the top and bottom different enough to avoid the appearance of a denim jumpsuit.

Like his T-shirts, Kanye's sneakers are a staple of his wardrobe, and he frequently pairs this casual footwear with dress pants and suits, as well as jeans. Kanye's shoes always look just-out-of-the-box new, and we can only imagine how many pairs he has in his closet.

Kanye's Pastelle clothing line never made it to stores, but the letterman-style jackets he wore from the collection showed his fondness for mixing retro preppy styles with more urban looks. And while most men wouldn't dream of grouping a retro jean jacket with a snug-fitting, mint-green knit sweater, oversized gold necklaces and light blue skinny jeans, somehow the combination not only works, but looks kind of fabulous on Kanye.

At a dinner hosted by designer Mark Fast in February 2012, Kanye proved his talent for mixing high fashion with street wear, looking incredibly stylish in a perfectly tailored tuxedo jacket and black button-down shirt worn with tight black leather pants and black high-top sneakers. While this striking all-black look was in keeping with the dress code for the Mark Fast dinner, Kanye is by no means afraid to add a pop (and then some) of color. Read on!