by Beth Brindle
Prev NEXT
10

Do Be the First to Wear It 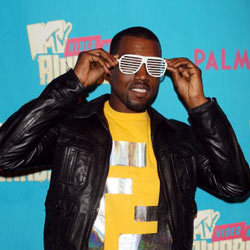 Kanye may not have been the first to wear shutter shades, but he found a way to make them his own.
Scott Gries/Getty Images

Kanye first rocked a pair of white shutter shades in his 2007 "Stronger" video, and the image of his face in the distinctive shades has become iconic. Everyone from Paris Hilton to Shiloh Jolie-Pitt embraced the trend, and the glasses have appeared on everything from T-shirts to Web site themes. But no matter where they turn up, these glass-less glasses are so inextricably linked with West that they're destined to be forever known as "Kanye glasses" or "Kanye shutter shades."

While Kanye wasn't technically the first to wear shutter shades -- they make an appearance in music videos by '80s bands Simple Minds and Animotion -- he found a way to make them his own, and he certainly deserves the credit (or the blame, depending how you look at it) for bringing them into the 21st century.

Of course, having a trend or two under your belt isn't always enough to guarantee success as a designer, as we learn in our next fashion lesson.