Browse the article 10 Fashion Lessons We Can Learn From Beyonce 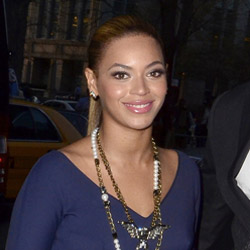 Beyonce Knowles has been making fashion headlines since she burst onto the music scene as the lead singer of the female R&B group Destiny's Child in the mid-1990s. With her mother Tina Knowles as her stylist in the early days, some of her sartorial choices were more attention-getting than admirable, but over the years, she has matured into one of our best-dressed celebrities. Her sense of color, keen understanding of what flatters her figure, undeniable flair for the dramatic, and willingness to experiment add up to one well-heeled diva.

And speaking of heels, her love of amazing shoes is legendary. Did you see the Alain Quilici boots she wore in New York in November 2011? Not only did she rock 5-inch heels (12.7-centimeter) effortlessly while pregnant, the boots themselves have a one-inch platform linking the toe and heel, making them look like ice skates! Let's take a look at ten fashion tips we could learn from Beyonce.

Beyonce is known for her hourglass shape, marked by her tiny waist and rounded hips. Her best looks take advantage of her womanly figure by accentuating her assets. She's not afraid to play up her curves with form-hugging garments and reveal a little skin. To keep sexy looks classy, not trashy, stylists often recommend picking one or two body parts to feature while keeping the rest under cover.

On the red carpet, Beyonce makes fashion work for her curvy figure by choosing form-fitting long, strapless dresses with a thigh-high slit or a bandage dress with color blocking to highlight her waist. For everyday, steal her look by choosing a tailored, belted jacket or top with jeans, a shirt dress or wrap dress that flatters your waistline and shows your legs, or try a short skirt with a pretty long-sleeved blouse that you've tucked in and belted.

Add Some Whimsy to Your Wardrobe 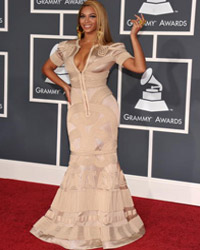 When your personality is larger than life, incorporating a bit of whimsy into your wardrobe just works. A fanciful dress featuring a tight corset and layered, asymmetrical skirt in an off shade of olive might look like a mess on a quieter personality, but Beyonce manages to let the look showcase her smile and glowing skin.

She's never afraid to channel fashion moments from the past and make them her own, even if it means adding dimension her figure. Case in point: The Thierry Mugler dress she wore for a promo for her 2009 world tour. The dress featured exaggerated hips that took its inspiration from Elizabethan styles.

In your own wardrobe, don't be afraid to add a few sequins, feathers, or colorful, oversized earrings to turn everyday looks into extraordinary ones.

Beware of Your Mother's Designs

Along with her mother and stylist Tina Knowles, Beyonce started House of Dereon in 2006. The fashion line pays tribute to three generations of Knowles women and brings fashions worn on stage by Beyonce to the ready-to-wear market.

While a few designs have been absolutely smashing, some have ranked among Beyonce's biggest fashion don'ts. At the 2009 Academy Awards, she wore a fitted fishtail dress that appeared to be made from a bolt of fabric intended for draperies. Another controversial look was the studded leggings she wore out on the streets of New York in January 2011.

When legendary design houses like Balmain and Versace know how to flatter your figure, it's okay to just say no to mom. 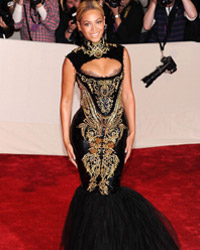 Not since Ariel from "The Little Mermaid" has a beautiful girl rocked a fishtail like Beyonce. This figure-hugging silhouette seems made for her hourglass figure, playing up those rounded hips with a slim curvy shape, skimming over legs, then trumpeting at the feet. Bright colors and sumptuous fabrics make the style even more fabulous.

Exquisite gowns with fishtails have been a favorite red carpet look for Beyonce for more than a decade, and she's proven the style works for her time and time again. Unless, of course, it's just a bit too tight, like the black and gold Emilio Pucci design she wore to the 2011 Costume Institute Gala at the Metropolitan Museum of Art that made walking almost impossible.

Experimenting Works ... Until It Doesn't

When the world is your fashion oyster, it's fun to experiment with different looks, and Beyonce is one personality who can do it with panache. Sometimes taking risks works beautifully, like her gothic goddess or rocker chick looks. Even the barely there dress she wore to perform at the 2011 Billboard Music Awards seems to work with her bootylicious figure and glowing skin.

And then sometimes it's not so great. Take the futuristic Gareth Pugh dress she wore to the 2008 MTV Europe Music Awards that makes you wonder "what was she thinking?" The blocky design fails to flatter Beyonce's famously feminine figure; its metallic look camouflages everything we love about the singer's soft curves.

Make Mine a Mini 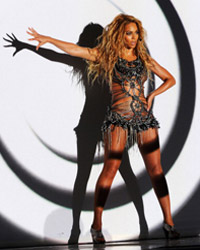 If you've got great legs, flaunt them.
Kevin Mazur/WireImage/Getty Images

Beyonce's got great gams, and she shows her toned legs beautifully in short skirts, whether working the red carpet or taking it to the streets for a casual day in the city. Time and again, she proves that short skirts work best with simple tops that keep arms mostly covered, except for a plunging neckline now and then. Bold accessories, worn with confidence, complement a short skirt and bright colors rather than compete with it.

And while some fashion pundits say the shorter the skirt, the lower the heels, Beyonce proves that breaking the rules is the best way to make a statement in her signature towering platforms and wedges.

Love Color -- and Let it Love You Back!

Bright, bold color suits Beyonce's vibrant personality, and she proves that making a splash with colorful outfits doesn't have to be limited to summer. Pairing a bright top with a patterned bottom is a brilliant way to make an everyday ensemble stand out from the crowd. Try it yourself by pairing a bright pink cashmere cardigan with a floral skirt or a pair of printed jeans. Pretty pastels are another way to play with color.

If you're not quite ready to take on a vibrant color palette from head to toe, take another cue from Beyonce: Choose bright yellow shoes or electric blue nail color for a pop of unexpected fun.

Elegance is Worth the Effort 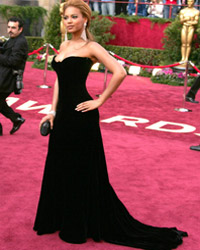 One of the most wonderful things about Beyonce is her versatility. Bright, bold, and pushing the fashion envelope one day, she also knows how to put on a beautifully elegant dress and dazzling jewelry the next to create a put-together look that challenges the fashion legacy of any best-dressed celebrity. Case in point: The amazing black velvet gown by Atelier Versace she wore to the 2005 Academy Awards. InStyle magazine recently singled this one out for its list of the "25 Most Breathtaking Oscars Gowns".

Another elegant gown that won rave reviews was a nude-colored, intricately detailed gown by Stefane Rolland for the 2010 Grammys. Complemented by Beyonce's understated make-up and hair, the overall effect was a classically beautiful "wow."

In the early days of Beyonce's career with Destiny's Child, her mother Tina was known for creating matching outfits for everyone in the band. In one famous appearance, four members of the band donned sari-inspired sarongs and bandeau tops. Sexy scout uniforms were another look that just didn't quite work. At other times, the girl group tried matching colors or identical dresses in different shades.

Fortunately, as her career has progressed, so has Beyonce's sense of style. Today, she's an individualist who makes fashion statements instead of blending into the crowd. Even in jeans and a T-shirt, she knows how to add the right accessories and attitude to look fabulous. 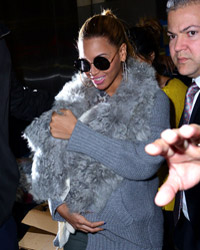 Beyonce and Blue Ivy head out on the town in New York in March 2012.
James Devaney/WireImage/Getty Images

Beyonce announced her pregnancy in gorgeous style in a bright orange Lanvin gown at the MTV Music Video Awards in 2011, and she showed just how fashionable expecting a baby could be in the months that followed. From street to New York Fashion Week to stage, she looked radiant and happy in outfits ranging from long gowns that skimmed her baby bump and minidresses that hugged it to more traditional maternity ensembles like menswear-inspired pantsuits or tunics and jeans. Always complemented, of course, by a great pair of sky-high kicks and dramatic jewelry.

Beyonce and husband Jay-Z welcomed a baby girl named Blue Ivy into the world on January 7, 2012, and the new mom was soon back in figure flattering dresses. She's even set trends by accessorizing a cozy winter ensemble with a fur sling and baby cuddled inside. As her baby girl grows up, it's a sure thing that Blue and Beyonce will be a stylish mother/daughter pair.