by Christine Venzon
NEXT PAGE

Men's and women's fragrances involve combinations of many of the same notes.
Yo Oura/Taxi Japan/Getty Images

In some ways, Western society is turning unisex. The 2012 Olympics were the first to include women's boxing. And some men are discovering the convenience of carrying a purse (they call it a satchel).

Yet in the perfume industry, fragrances labeled "his" and "hers" -- literally -- are still the norm. It's been nearly two decades since the 1994 debut of Calvin Klein's ck One, arguably the first unisex, or shared, fragrance from a major brand. Why do these equal-opportunity fragrances remain a niche market?

The truth is, the gender lines aren't as clear-cut as the labels suggest. In fact, your favorite fragrance is apt to be an aromatic cross-dresser.

To understand what makes a fragrance unisex, it helps to understand what constitutes men's and women's fragrances. A perfume consists of different scent-bearing chemicals dissolved in alcohol. Similar scents, or notes, are grouped into one of four main categories: floral, oriental, woody and fresh. Florals, predictably, smell flowery. Oriental describes intense smells such as incense and spices (think nutmeg and cinnamon). Woody notes include mellow aromas like leather and tobacco, as well as woods such as pine. And fresh encompasses clean, outdoor scents: water, salt air, green plants, and citrus and other fruits.

In 2009, a study of some 5,700 fragrances found that about 65 percent of all women's fragrances had a strong floral component, while woody notes dominated in 65 percent of those for men. Of the handful of unisex fragrances included (550, or less than 10 percent of the total) 40 percent were permeated by fresh notes.

Based on those numbers, the gender differences seem obvious, and they're what most people have come to expect: Women like light and flowery fragrances, men prefer bolder ones, and the aromas of food and water appeal to everyone.

The future of men's and women's fragrances may be even more harmonious. Gender-based preferences for certain scents is a cultural norm dating back to 19th-century Europe. And increasingly, it doesn't work for today's fragrance aficionados. A small but growing number of women are dabbing on the lighter men's fragrances, while more men are spritzing on perfume.

So far, a few high-end perfume houses are exploiting the trend and dropping the gender designations. (One boutique brand, Demeter, offers edible and offbeat scents ranging from fiery curry to funeral home.) Consumer demand may yet open the industry's eyes, and nose, to the profitability of unisex fragrances.

More on Fragrances and Gender 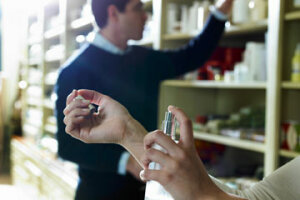 Is it OK for women to wear men's fragrances? 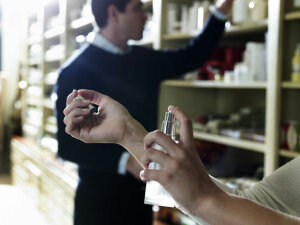 Is it OK for men to wear women's fragrances?