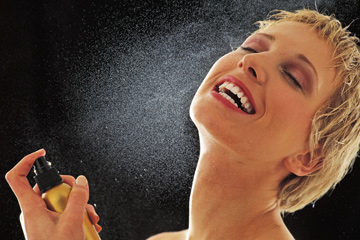 Put an end to overspray!
Comstock/Thinkstock

We've all been stuck in an elevator or a small room with someone who has been overdoing it on his or her daily perfume application. As irritating as it is, it's typically a temporary situation so there's no need for any confrontation on your part. But what if that person is someone you spend a lot of time with? You'd probably feel obligated to tip off a friend who is rocking some B.O., so why would too much fragrance be any different? A good rule of thumb is that if peoples' fragrance enters the room before they do, or lingers a good bit after they've left, they're wearing too much. As the person on the receiving end of the eau de overload, it's tricky to know how to handle the situation diplomatically. If you're not sure, you can always come at it from a health standpoint. Fragrances are known to contain chemicals that can be irritating to certain people. They especially tend to aggravate breathing problems in people with asthma, so if a scent is truly overwhelming, it might be more appropriate for off hours.

Before you approach a co-worker, find out from management if there is a policy about wearing fragrances to work. Mandatory fragrance-free environments are common in hospitals and doctors' offices, but many regular office policies don't weigh in one way or another. If that's the scenario, then consider pitching a policy to your bosses. Print out some research before approaching them, both about the impact on health and some ideas for how to implement the policy. Not only will you save them the time of having to do it, but you'll look like a proactive problem solver rather than a complainer. And then, if employees understand the "If I'm smelling you, I'm telling you" policy that is in place, you won't look like the bad guy when you ask them to enforce it. But if it's a loved one's eau de cologne is giving you a grand headache, it might be time to stage a one-on-one fragrance intervention. Read on for important tips about performing this rather stinky task.

Tips for Staging a Fragrance Intervention

The No. 1 tip for staging a fragrance intervention is to approach the person with kindness. You know what they say -- you catch more flies with honey than vinegar. If the issue is that your mom, your co-worker or your husband tends to overdo it with the scent, it's likely that the offender isn't aware of his or her actions, despite the fact that it's highly annoying for you. If you've built up some substantial irritation about the issue and are afraid you may not be able to say it nicely, plan out what you're going to say ahead of time. It's important to be straightforward about your issue, but try to be as diplomatic as possible. Explain that while you appreciate that your friend wants to smell nice, the amount that she's applying is affecting your enjoyment of your common space. If all else fails, you can always cop out and say you're allergic. Just make sure you don't wear your own perfume to that conversation.

If the issue is that you like fragrance but don't care for the one the person is wearing, the easiest way to deal with that is to gift them with one that you like or recommend. You may want to mention it in an off-hand way before purchasing to see if they have an opinion about the brand. Better yet, tell them you're interested in freshening up your personal scent and see if they want to accompany you to the fragrance counter. Best case scenario is they're open to trying a new scent. Just keep in mind that your person has likely chosen their scent as an extension of his or her own tastes, so if they like sweet but you like woodsy, you may not be able to get them to tone it down to your preference. If that's the case, you may have to come clean and just tell them you don't particularly care for their scent of choice.