Bags: What are the best investment pieces? 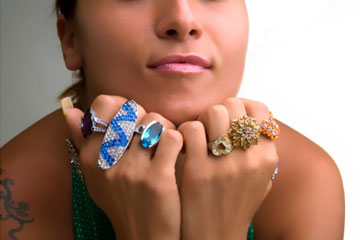 Costume jewelry is affordable and trendy. But don't wear too many pieces at once!
Thinkstock

If diamonds are a girl's best friend, then cubic zirconium and costume jewelry are her sorority sisters. They're bold and beautiful, fun to have around, and the good ones become more precious with time.

In the simplest terms, costume jewelry are pieces that don't include precious stones or metals. But these stylish jewels vary tremendously in design, price and reasons for ownership. Coco Chanel, one of the most well-known costume jewelry designers, once said: "I couldn't wear my own pearls without being stopped on the street, so I started the vogue of wearing false ones."

For as long as women have adorned themselves in jewels, other women have yearned for the look, but at an affordable price. From the glamorous stars of Hollywood's golden age to today's runway divas -- their necklaces, rings, earrings and bracelets have been envied and copied. As manufacturing and mass production have improved, it's become more difficult to distinguish the real things from the fakes.

In the first half of the 20th century, costume jewelry was sold at both fine and discount department stores; and by the end of the century, it was also a staple on cable television stations like QVC and Home Shopping Network, where copies of Jackie Kennedy's emerald and diamond earrings became available for under $50 [source: QVC]. The simulated pieces earn rave reviews from the people who buy them, and let's face it, it's tackier to question their authenticity than to wear them.

Costume and Proud of It

Costume jewelry doesn't try to pass itself off as the real thing or an heirloom. It's manufactured specifically for fashion and generally reflects the trends of the times. In the 1940s, with the world at war, costume jewelry was less lavish than the big, bold postwar baubles of the 1950s. In the 1960s, costume jewelry mirrored the icons of the decade, including flowers, pop art and mod designs. The jewelry styles of the 1970s had an ethnic style and included silver, turquoise, feathers and wood. But like most trends, it didn't last long and was soon replaced by the glitz and glitter of the disco era and then the opulent 1980s.

Today, "bling is the thing" and it's not only affordable but also accessible. For teens, $7.50 will buy a perfectly acceptable pair of chandelier earrings at Claire's, the leading retailer of fashion accessories and jewelry [source: Claire's]. Meanwhile, a similar, more substantial silver plated and cubic zirconium pair of chandeliers is available online for $197 [source: Sparklesforever.com]. In both cases, you get what you pay for, and to a teen with fleeting tastes, spending less than $10 is just right.

One of the latest trends is to wear vintage costume jewelry. In what appears to be a contradiction of terms, manufacturers are now producing reproduction costume jewels. But purists are on the prowl for original pieces. They scour eBay, thrift stores and flea markets for everything from original brooches and bracelets to cocktail rings and chokers stamped with designer names or trademarks. The older the piece and the better the quality, the more likely it will become a treasured heirloom.

The Dos and Don'ts of Caring for Costume Jewelry

If you'd like your costume pieces to become heirlooms, you'll need to take good care of them. So, here are some tips:

"A woman should mix fake and real. To ask a woman to wear real jewelry only is like asking her to cover herself with real flowers instead of flowery silk prints. She'd look faded in a few hours."

"I love fakes because I find such jewelry provocative, and I find it disgraceful to walk around with millions around your neck just because you're rich."

"The point of jewelry isn't to make a woman look rich but to adorn her; not the same thing."

Recycle Your Old Crocs and How
Guide to Finding the Best Shoes for Skinny Jeans
Mix and Match or Matchy-Match: Purse and Shoes