Is popular music inappropriate for kids? 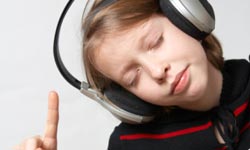 Lots of kids enjoy popular music, but the content of some songs might raise parents' eyebrows.
Hemera/Thinkstock

It's a question every parent has to think about sooner or later: Is it all right for my kid to listen to popular music? There are lots of factors at play, including lyrics, or the public image of the band or singer.

First off, let's define "popular music." It's a pretty broad category -- anything your child has relatively easy access to. In our hyper-connected world, we're all a click away from an unlimited number of songs and videos.

Your kid is also influenced by what's on television, what his or her friends are listening to, and what's on the radio. It's a constant stream of information, and sooner or later your child is going to latch onto something that catches his or her eye.

So, should you declare all popular music off-limits? No, because that's not really practical or helpful. Instead, take it on a case-by-case basis.

Bear in mind that, no matter how hard you try, at some point your child will almost certainly see or hear something you'll consider inappropriate. This doesn't represent your failure as a parent, so don't fly off the handle.

So, how do you keep tabs on what your kid is listening to? Check out the next page for our tips and tactics.

Be Aware, Not Overbearing 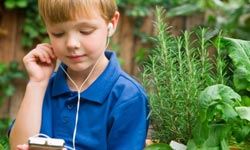 Careful about using earbuds: They can be too loud for kids' ears.
Jupiterimages/BananaStock/Thinkstock

You can't always be looking over your child's shoulder -- nor should you. But you can help limit his or her exposure to inappropriate material by setting parental controls on Internet and television, and by limiting the amount of time he or she is allowed to spend on those activities.

If your child has an MP3 player, let him or her know that anything on it is subject to your approval. Privacy is important for kids, but you also have the right to know what they're into. If you notice that they're listening to songs with objectionable lyrics, or watching music videos that are way too mature, talk to them. Explain why you don't think it's appropriate, and allow them to voice their opinions, too. Kids will likely be more receptive to that approach than to a no-discussion, no-explanations ban.

Remember, you were young once, too, and probably had arguments with your own parents over what music you could or couldn't listen to. Whatever it is that your kid's interested in, give it a fair shot before you say "no." Just because it's not to your taste doesn't mean it's necessarily bad. Music is one of the first forms of self-expression kids latch onto. Give them the freedom to grow, and they will.