Browse the article Are teens too young to go under the knife? 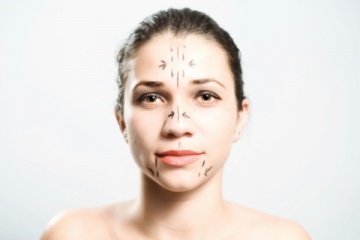 How young is too young for plastic surgery?
iStockphoto/Thinkstock

When a teenage girl detests her uncommonly big breasts or a young boy is embarrassed by a bump on his nose, parents, plastic surgeons and the children themselves must decide: Is it right to operate?

More than 326,000 18-and-unders had cosmetic procedures in 2004 to correct something that made them self-conscious, according to the American Society of Plastic Surgeons. But is plastic surgery, with the risks it involves, the right way to deal with these common teenage tribulations? In some cases, absolutely, says Frederick Lukash, M.D., a New York plastic surgeon who has operated on many youngsters whose self-image was on the rocks.

It's hard to find teens who are completely content with their faces and physiques. Add the misery of peer teasing to the mix, and many a youth might jump at a perceived fast fix for their "flawed" body parts.

But surgery shouldn't be seen as an easy way out, according to Lukash, who frowns on surgery when weight loss or the like can get a similar result. "I'm adamant that teenage plastic surgery has a definite place, but it has to be on the right individual for the right reason," says Lukash. A motivation that fails to make his cut: "not making the cheerleading squad because your thighs are too fat."

According to the American Society of Plastic Surgeons, parents should ask these questions to help assess whether their child's reasons for surgery are right, and to help make sure their teens are physically and mentally prepared:

The decision should be completely individualized, Lukash points out, "based on a patient's physical condition, their emotional condition, the needs they have, and their ability to understand what they're going to get."

Lukash's daughter, Abigail, was young for a high school senior — just 16 at the time — but mature enough, she and her dad agreed, to make the decision to get a new nose. "It wasn't an awful nose that people picked on or anything," says Abigail, who felt self-conscious about its shape. Lukash turned to her father for surgery to fix what she couldn’t. "If you're heavy, you can lose weight," says the now-20-year-old, who herself works out to look and feel fit. "If you don’t like your hair, you can change the color or cut it. But my nose was something that bothered me and lowered my self-esteem, but that I couldn’t personally change."

A nose reshaping like Abigail got, medically known as rhinoplasty, is the most commonly requested procedure among teens, and is fine for some youngsters, says the senior Lukash. Noses have reached their near-final form by age 13 or 14 in girls and 15 or 16 in boys.

These surgeries are also OK for minors, if the reasons are right:

The following surgeries should wait until adulthood, as a rule:

When it comes to performing plastic surgery on a youngster, plastic surgeon Lukash says "there should be no generalities— no 'good' or 'bad.'" Lukash believes self-conscious teenagers should be allowed to pursue a "self-esteem lift," for sure, if they are at risk for psychological scars, which follow some into adulthood.

The plastic surgeon likens a carefully considered cosmetic procedure to a medically required reconstructive surgery to fix a cleft lip or other physical defect. "I look at it all as quality-of-life surgery," the doctor explains. "We're trying to make a person feel better about themselves."