5 Things Your Tween Won't Tell You 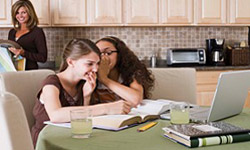 Image Gallery: Parenting What's on your tween's mind? They aren't the most forthcoming people in the world, so you'll need to do some detective work to find out. See more pictures of parenting.
Comstock Images/Getty Images

When Sarah's son was small, the two of them used to play a little game when she picked him up from school. "What was the bestest thing that happened today?" she would ask. Mark would reply enthusiastically with a long list of best things, from making an A on a science test to playing kickball at recess.

Since Mark turned 13, however, his usual answer to the question is now "Nothing," followed by a stony silence as he listens to his iPod and stares out the car window.

Have aliens kidnapped this once-happy and bubbly child and replaced him with a silent avatar? Not quite. It's a perfectly normal reaction for someone going through the tween years -- he's not quite a child, but not yet a teenager, either. The struggle for independence and developing an identity of one's own has its ups and downs, and one of its hallmarks is keeping some important issues and feelings private.

Navigating the tween years is difficult for parent and child alike. Although it may be hard to talk to your son or daughter right now, it's more important than ever that you understand what's going on in his or her life, as well as your kid's rapidly developing body and mind.

Read on and learn about five things your tween won't tell you -- but you need to know.