Browse the article 5 Strategies for Dealing with Cyberbullying 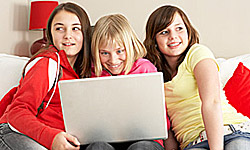 Laptop Pictures Kids need to be taught to not turn a blind eye when a friend is cyberbullying someone. See more pictures of laptops.
Hemera/Thinkstock

Bullying used to be pretty straightforward. A kid (or kids) ganged up on other kids, shouting taunts at them, shoving them around or stealing their stuff. But that took actual brute aggression, and most kids weren't up to mustering that level of face-to-face cruelty. Then along came the Internet and many less-physically empowered kids had their "prayers" answered: They could be despicably malicious to classmates and peers with seeming anonymity and impunity.

This new style of bullying is often considered more intimidating than physical violence. Tweens and teens (the most common victims of cyberbullying) can't leave their bullies at school anymore. Cyberbullies can follow them home; they can come into their dens and bedrooms. Whether it's harassing text messages, chat room rumors, embarrassing e-mail blasts, hurtful online polling or incriminating photo uploads, cyberbullies have a lot more in their arsenal -- and are able to deliver to a much wider audience -- than the bullies of years past.

If you suspect cyberbullying could become an issue in your household, you have a number of strategies available for helping your children deal with it. The first thing you need is information.

To deal with cyberbullying, you have to know whether or not it's occurring. It's important that your teens trust you and are willing to come to you if there's an issue. When they do, you'll want to strike a balance between overreacting and under-reacting when you hear the news.

But if your adolescents aren't the most forthcoming about their online activities, and you suspect something is up, you may need to do some legwork to find out whether there's an issue, say by purchasing some monitoring software. To protect your children from cyberbullies, it's important to keep tabs on what technologies they're using, how much they're using them and with whom they're using them.

When it comes to Facebook, it's a good idea to have your kids "friend" you so you can see what they're posting and what other people are posting about them. If you can, ask them for some of their passwords, too, so you can keep an eye on their online communications like IMs and e-mails. Set limits on how much they can use the Internet and other electronic devices -- studies have shown the more time teens spend online, the more likely they are to fall victim to cyberbullying.

To provide less fodder for cyberbullies, educate your children about the importance of maintaining decorum and privacy both online and offline. If there's already a cyberbully harassing your children, you'll also need to teach them how to handle it. The best strategy in many cases is to ignore the bullying, or at least not react to it. While it's not always easy, simply deleting hurtful communications or avoiding dwelling on them can often help diminish the cyberbully's eagerness to continue. You can also consider approaching the parents of cyberbullies (if you know who they are) to see if they're willing to intervene.

If you suspect your kid is the one doing some cyberbullying (teens often switch back and forth between bully and bullied), explain how awful it's probably making his or her victim feel. Also, emphasize how cyberbullying is neither funny nor harmless, and how their negative actions can have serious consequences. 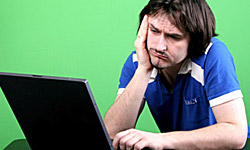 Do you want strangers sending inappropriate messages to your teenage daughter? Didn't think so.
©iStockphoto.com/Thinkstock

You don't want strangers to be able to contact your kids. So advise your teens to tweak their privacy settings to restrict who can see info about them online, especially on social networking sites like Facebook. Also, work to limit how searchable their personal information is, because the less potential cyberbullies are able to access and exploit it, the better.

You can also block or sever the lines of communication between an existing cyberbully and your kids by having them take steps like changing their e-mail addresses, phone numbers and other forms of online presence. Remind them to never share their passwords or stay logged in to sites when they're away from their computers. 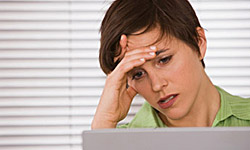 Don't like what you find on your kid's computer? Consider making a copy to save in case the situation escalates.
Jupiter Images/Comstock/Thinkstock

If it starts to look like the cyberbullying could be serious -- maybe your child has grown despondent, depressed or has been threatened physically -- then it's important to archive and print out any evidence you can get your hands on.

Whether that's texts, e-mails or screenshots of wall posts, document any incidents of cyberbullying so you have a reliable record. Make sure you also keep tabs on the dates and times of different occurrences. You'll need the proof you collect if you plan on going to the authorities in order to support your case.

Not all cyberbullying is punishable under the law, but if the bullying escalates beyond what you believe is acceptable, contact your local police department or the nearest FBI office. They can either help you or point you to an appropriate law enforcement agency. This is especially true if the cyberbullying involves actions like password theft, identity theft or threats of physical or sexual violence.

You can also contact your child's school. Guidance counselors and others there may be able to help, although not always by directly disciplining a cyberbully if he or she acts off campus. They can educate students about the harmfulness of cyberbullying, amend their acceptable-use policies to include applicable punishment clauses, and be on the lookout for on-campus bullying. Finally, you can cut off a bully's lines of communication by filing complaints with Internet service providers (ISPs) or Web site moderators who often have the power to suspend or ban cyberbullies.