by Laurie L. Dove
Prev NEXT
8 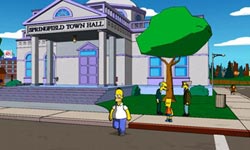 In this shot from a Simpsons' video game, Homer seems to have forgotten about his son Bart.
HO/Reuters/Corbis

Bumbling Homer Simpson is the king of cartoon dads -- especially when it comes to putting his kids last. Homer does his time at the nuclear power plant, dreams of doughnuts and when the workday ends, he heads to the local bar. He's fond of dishing out meaningless but hilarious advice to his son Bart like, "With $10,000, we'd be millionaires! We could buy all kinds of useful things like...love!" In one episode alone, he steals Bart's food and then sets him on fire. And every now and then Bart's behavior drives Homer to strangle him -- literally. Still, Homer has bigger concerns than obviously bad parenting. Like not letting the kids come between a man and his beer. Who else but Homer could we count on to belt out, "I'd rather have a beer than be Father of the Year"?