Browse the article 10 Types of Teens: A Field Guide to Teenagers 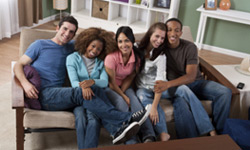 Teens often identify with a certain group or subculture, but not all do.
Comstock/Getty Images

Ever feel like an anthropologist trying to decipher the odd customs of the tribe known as teenagers? Cliques and subcultures are always forming based on attitudes, styles of dress, and tastes in music. This guide will help you to identify the group where your own teen belongs.

First off, don't panic. Even as they try to fit into a social group, teens are struggling to find their individual identity. So, strange behavior, outlandish dress, wacky hairdos -- it's all par for the course. And if you find it hard to understand, well, that's the point.

If you're tempted to laugh or tear out your hair, just remember that you were a teen once, too. Who can't pull out at least one cringe-worthy snapshot from those years? Keep in mind that while teens may fall into categories, each one is unique. So, be sure to look at the complete person, not just the pink hair. Talk to them. Praise them when you can -- their self-esteems can always use a boost.

Now, let's delve into this foreign culture and have a look at some of the types. 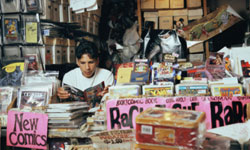 An obsessive interest in anything, such as comic books, can be a sign of geekdom.
Gabriela Hasbun/Taxi/Getty Images

They're obsessed with something. It might be computers or computer games, comic books, anime, "Star Wars" or superheroes. It may even be a school subject or activity -- there are math geeks, band geeks and drama geeks.

Sometimes geeks' superior knowledge or devotion to something can create a wall separating them from outsiders. They may not always welcome your attempts to understand or get involved in their world.

Geeks usually aren't fashion-conscious and may be introverted. They often do well in school, especially in subjects that grab them, such as science, art or writing. The flip side to watch for is neglect of those subjects that don't turn them on. Same with socializing -- they may limit their friends to only those with similar interests.

Their "type" has been around forever, and you can spot them by their T-shirts, school colors and running shoes. They're the teens who live for athletics. One big change from when you were a teen might be that this category isn't just for boys anymore -- many girls are jocks as well.

Sports are a great way for teens to burn off excess energy. Plus, jocks tend to be popular -- at least with many of their peers. Adults also tend to look on these students as leaders among their peers.

Of course, all the adulation can be a problem. Many athletes may look for (and even sometimes get) preferential treatment at school. It can be too easy to put sports before studies. Watch out for jocks who become bullies, and for the win-at-any-cost attitude.

In spite of their not-so-bright stereotype, kids who participate in athletics often do better in school than non-athletes, according to a study of 12,000 U.S. students published in the Journal of Sport and Exercise Science in 2003.

In your day, you might have known them as surfer wannabes. Since then, skaters came along and borrowed the long hair and slacker trappings of the surf scene, but they have always been more rebellious.

Look for Vans retro sneakers and oversized tees. They may call each other "dude" and move through the world with their attitude on display.

As a parent, the first thing to remember when dealing with a skater teen is to avoid stereotypes. Yes, a few skaters might be looking for trouble, but most are not. In fact, skaters today are more likely to be devoted to skateboarding as a sport, practicing long hours to land complicated tricks.

Try not to get too upset over those outlandish stunts -- and the occasional sprained wrist. But don't be tempted to try the tricks yourself, either.

Skateboards were around before the parents of some of today's skaters were born. The first board for "sidewalk surfing" was mass produced in 1959. 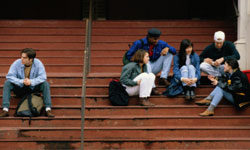 Many teens are content not fitting exclusively with any one group.
Ron Chapple/Taxi/Getty Images

Not every kid fits neatly into a category. There are basically three types of "outsider" groups that a teen might fall into. The socially challenged teen has trouble making friends and just doesn't fit. The independent teen might be a "floater," who has a variety of friends and feels no need to join any one group exclusively. The determined outsider actively rejects cliques and may even hang with fellow outsiders, who form their own group (go figure).

Experimenting is natural during the teen years, and kids often change their circle of friends. Some teens really are loners by nature. It's important not to jump to the conclusion that there's something wrong with them.

At the same time, outsiders can become the targets of bullying, so keep an eye on these teens and be ready to intervene if they become too isolated.

They make a big effort to assemble a wardrobe that seems effortless. Guys and girls alike go for tight jeans, flannel shirts, Buddy Holly glasses and vintage clothing. They sport a cooler-than-thou, I-could-care-less attitude, and they try hard to be ironic at all costs.

In your day, they might have been called indies or the artsy crowd. Before that, they were hippies. Today, it's not so much "peace and love," but rather an appreciation of independent music and a taste for fringe movements that defines them.

Don't try to outdo hipsters at being hip. You might remind them that there's often a fine line between hip and smug. Dismissing others because they aren't up on the latest is simply, well, not cool.

In 2009, Time magazine writer Dan Fletcher defined hipsters as "the people who wear T-shirts silk-screened with quotes from movies you've never heard of." 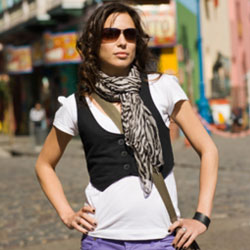 These teens are ever eager to fit in. They're dedicated followers of fashion, devoted to a particular band, club or style. They dress in tight, fashionable clothing, wear sunglasses and sport wild but styled hairdos (think striped, streaked or spiked).

Social media platforms like Facebook and Twitter are popular with all teens (and a lot of adults), but for scenesters, these Web sites are totally essential.

Scenesters sometimes get labeled posers or wannabes. There's a danger of some of them being drawn into the drugs and alcohol use sometimes associated with a club or scene, but not all do. One category of scenesters goes in for the scene but rejects these dangerous trappings -- they're known as straight-edge scenesters.

You know them by their logos: Lacoste, L.L. Bean., Abercrombie & Fitch. Popped collars and polo shirts are standard, and their grooming tends to be impeccable.

In your day, preps might have actually gone to prep school, but the category has grown since then. Today, they tend to be the latest incarnation of the in-crowd: the popular kids. Sometimes they overlap with jocks, especially when it comes to sports such as golf or tennis.

One of the things to watch for with preps is overachieving. Keeping up schoolwork, being involved in too many organizations or getting into the right college can stress them out. Maintaining the right image may even make them vulnerable to eating disorders.

Carol McD. Wallace, one of the authors of the spoof that made "preppy" a household word in 1980, said she is amazed how durable the style has been."Maybe there was an implicit promise embedded in the humor: this ease, this comfort can be yours if you dare to wear pink and green," she wrote in the New York Times in 2005. 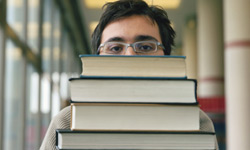 If your teen is especially good at academics, his peers might consider him part of the nerdy crowd.
Digital Vision/Getty Images

You might have called them "brains" or "teacher's pets" when you were a teen. They're the first kids with their hands up, and they always have the right answer. They might not have the fashion sense of other groups, and they usually prefer chess to hoops.

At one time, anyone who understood the mysteries of computers was considered a nerd. Now, a whole generation is computer savvy, so modern nerds might be the ones who understand the science behind the techno glitz.

Nerds are smart, but they sometimes have a hard time socially. Many teens still think being academically gifted just isn't cool. It's important for parents to counter this idea, emphasizing the real advantages to learning. 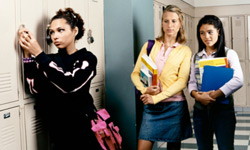 Mean girls might be your teen's friends one day, then turn on her the next.
Digital Vision/Getty Images

The 2004 movie "Mean Girls," starring Lindsay Lohan as a girl negotiating the jungles of teenage subcultures, put a new label on this type of teen.

High heels, short skirts -- whatever the latest fashion is, they're into it. They form exclusive cliques, and gossip is their native language. In your day, they might have been known as Valley Girls or Barbies.

Mean girls crave popularity, often because they feel insecure. Yet they have a hard time with genuine relationships. They cultivate "frenemies," which are girls they hang with but secretly hate. Even their BFFs (best friends forever) might be spurned tomorrow.

The name points toward what you should watch for. Petty gossiping is one thing, but real, verbal bullying can be destructive.

The teen years can be an emotional roller coaster, and emo kids are the ones eager for another ride. Their emotions are reflected in their appearance: black clothing, streaked bangs, tattoos and piercings. They maintain a strict fashion sense while insisting on their individuality -- not an easy task.

The emo style has its roots in punk culture, which tended to be more rebellious, and goth, which was gloomier. All of the groups shared an angst that most of us can remember suffering at one time or another when we were teenagers.

The way emo kids speak their inner feelings might make them seem whiny, but that doesn't mean the emotions aren't heartfelt. Watch these kids for signs of depression or bipolar tendencies. They may also experiment with self-injury and cutting.

Regardless of which group (or groups) your teen may identify with, remember that looking past any label and keeping lines of communication open are the key to helping your teen discover his or her identity.

A 2006 survey by the American Academy of Dermatology showed that 36 percent of Americans age 18 to 29 have at least one tattoo.