by Matt Sailor
Prev NEXT
1

I'm already a smoker, how can I quit? 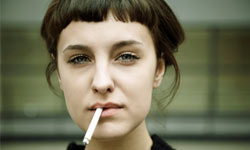 It's tempting to punish your child for smoking, but it's important to show them you respect them for telling you the truth.
iStockphoto/Thinkstock

One of the more difficult conversations you can have with a child is after they admit to you that they have started smoking. It's tempting in a situation like this to blow up and punish the child for going against your rules. But it's important to show your child that you respect and admire them for coming out and telling the truth. So don't focus on punishment, but instead on ways to get through quitting together [source: Dowshen]. If they're serious about quitting, the difficulties of that process are often punishment enough.

Pediatricians can offer help quitting smoking. They can offer prescriptions for smoking cessation drugs, or give advice on whether to use patches, gum, lozenges or other quitting aids. They can also talk your child through the process, if you would feel more comfortable relying on a professional [source: McCoy]. Try to be supportive during the quitting process. Here are a few tips to pass along to your child: