10 Drinks Your Kids Should Not Be Drinking

Browse the article 10 Drinks Your Kids Should Not Be Drinking 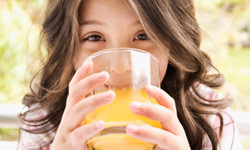 Image Gallery: Summertime Treats From sodas and chocolate milk to fruit juice and bottled water, what your kid is drinking might not be as good for him or her as you may think. See pictures of summertime treats.
Paul Vozdic/Workbook Stock/Getty Images

Many kids have a drinking problem that could be harming their health: sodas, energy drinks, lattes and even chocolate milk. From innocuous-seeming bottles of flavored water to sports drinks that seem to populate every Little League dugout, we uncover the truth about what your kids (and ours) are drinking. The truth is that the silent calories and surprising ingredients in these and other beverages are often the equivalent of liquid dessert -- or worse. In fact, most Americans get 450 calories a day and an extra 23 pounds (10 kilograms) a year from what they drink, a University of North Carolina study reported.

So, when it comes to what your kids are drinking, what are the 10 worst offenders? Some of the answers may surprise you. 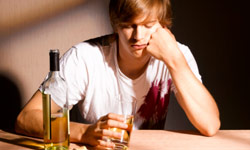 You might be tempted to let your kid have a sip of alcohol at home, but it can cause even more impairment in kids than it can in adults.
Peter Dazeley/Photographer's Choice/Getty Images

This one should be a no-brainer. You don't want your kids knocking back a cold beer with their after-school snack. Plus, in many U.S. states, you could get arrested for giving underage kids alcohol. Even if you live in a part of the world where it's OK for kids to drink wine or beer with dinner, take note: Each sip can affect their growth and development. According to the American Medical Association, when kids drink alcohol, it affects memory and impairs learning even more than it does in adults. And as kids' developing bodies attempt to metabolize the alcohol and calories at the same time, it can cause them to gain weight in a hurry. 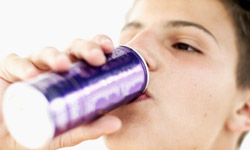 Energy drinks are made for adults' bodies, and the stimulants are usually too strong for a developing child.
Stockbyte/Getty Images

Your kids may think it's cool to knock back a Red Bull, but are there risks? You bet. Just one energy drink can give them a caffeine boost in the 100-milligram range -- nearly half of the daily recommended amount for adults. Too much of this stimulant can lead to abnormal sleep patterns -- if it doesn't keep your child from sleeping at all. Plus, some energy drinks often contain another stimulant called ma huang, which is a form of ephedrine. When the rush finally wears off, all this artificial energy may affect the body's ability to make its own natural energy chemicals. But energy drinks aren't the only method of caffeine delivery you have to worry about. Find out why in the next section.

You might not pour your kids a cup of coffee in the morning, but they still get plenty of caffeine from surprising sources like flavored ice creams, coffee flavored drinks and orange sodas. The U.S. hasn't set recommended limits on caffeine for kids, but parents know too much is never a good thing. Canadian guidelines call for only 45 milligrams a day (a glass of soda has more than that). We know it's easy to belt out "grande frappuccino" when the kids are begging for their own Starbucks treat. But they'll be sipping more than 200 milligrams of caffeine, well over their recommended daily max.

What's Wrong with a Caffeine Buzz?

Probably not too much, if you're an adult. But if your body is still growing , caffeine can really take a toll. According to the U.S. Department of Health and Human Services, caffeine can cause dehydration, as well as raise a child's heart rate and blood pressure. It can also cause a child to become agitated, fidgety or irritable. 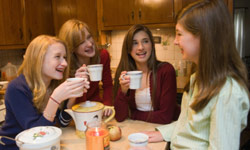 Teas can be a great, healthful drink option, as long as you don't add too much sugar.
Michael Krasowitz/Photographer's Choice/Getty Images

Unless your kids insist on decaf, drinking tea will impart caffeine, too. But the unsweetened versions of black, green and white (so named because the buds are covered with white hair when picked before maturity) teas also offer some benefits, such as antioxidants that may help prevent cancer. Grab the sweetened kind, however, and your glucose levels will be in for a shock. The label on one popular bottled tea lists 63 grams of added sugar. That's like stirring in nearly one sugar packet for each ounce of liquid. Think that's bad? On the next page, we'll tell you what's in a soda.

Shut Down the Soft Drinks 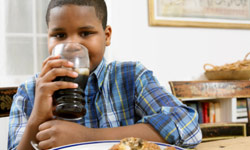 Gulping down soft drinks can start your kid on the habit of opting against more healthful drink choices.
Digital Vision/Getty Images

It's sweet, slightly addictive and the bane of dentists everywhere. Still, the average kid drinks a couple of sodas every day, reports the Center for the Science in the Public Interest, making all that sugar a chief culprit behind obesity, diabetes and other health problems. Plus, letting your toddler or preschooler sip on soda can have lifelong consequences. A study published in the Journal of the American Dietetic Association found that girls who drank soda continued the habit as adults, opting for sodas over nutrient-rich drinks, such as milk. But don't assume diet soft drinks offer a loophole: A Purdue University study found drinking artificially sweetened sodas may cause weight gain, too.

Fruit's good for kids (and grown-ups, too), but fruit drinks aren't. In fact, fruit drinks aren't really more than non-carbonated sodas in sheep's clothing. They contain little fiber and few of the fruit's original nutrients -- especially if they're labeled "juice cocktail," juice-flavored" or "juice drink."

Even 100-percent fruit juice isn't a great choice. Sure, it has vitamins and antioxidants, but one serving can have as much sugar as a candy bar. Some carbonated juice drinks can have up to 6 teaspoons (30 milliliters) of sugar -- more than some sodas -- with food acids that can make short work of a child's teeth. Want to lessen the impact? Mix water and juice to offer the taste while easing the harmful effects.

Juice, for Which Age?

Regardless of your child's juice of choice, the American Academy of Pediatrics recommends putting the brakes on the Big Gulp. Limit juice consumption to 12 ounces (350 milliliters) a day for most children. Those younger than 6 shouldn't drink more than 6 ounces (175 milliliters) a day. Too much juice means too many calories, which can contribute to obesity.

Milk, but Which Kind? 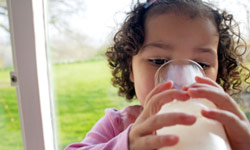 Make sure you're giving your little one milk that's been pasteurized.
Peter Cade/Iconica/Getty Images

Milk is a healthful choice for most kids, unless it's raw. According to the U.S. Food and Drug Administration, unpasteurized milk can pass harmful bacteria to your kids, including E. coli or Listeria. The same goes for raw juices, such as unpasteurized apple cider. Soy milk contains phytic acid, which health research nonprofit the Weston A. Price Foundation cautions may cause growth problems in children. So, now you're back to thinking plain old cow's milk is the right choice. Just don't reach for a gallon of pre-mixed chocolate milk. One 16-ounce (450-gram) bottle can dish out 10 grams of fat and 60 grams of sugar.

Don't Power Up the Carbs 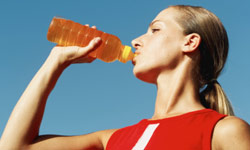 Unless your teen is an active athlete, the sugar and carbohydrates in sports drinks are more than he or she will need.
George Doyle/Stockbyte/Getty Images

A "power" drink such as Gatorade is supposed to give athletes a boost, but that's not all it will do. Chock full of sugar, it can boost your kid's weight and the frequency of his or her doctor visits. Electrolytes such as sodium and potassium can help replenish the body's stores, especially if your teen's into distance running or double-overtime soccer games. But if you're the parent of a less athletic child, skip the power drinks -- the nutrients don't make up for their high sugar content.

Water, With Flavor (but What Else?) 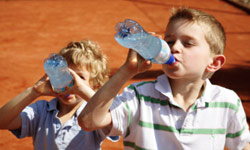 Plain bottled water will still keep your kids hydrated without any of the extra, unnecessary ingredients.
Leander Baerenz/Photodisc/Getty Images

Water's always a good idea, right? And if a little added flavor can get your kid to drink it, all the better. You've unwittingly entered the danger zone: Flavored waters often harbor hidden ingredients. Some may add vitamins, which many dietitians recommend getting from a balanced diet instead of a bottle. Many of these nutrients (like vitamin C or B) will pass out of the body through the kidneys, but consuming extreme amounts could affect the way your child's body absorbs other nutrients. Plus, flavored water may contain artificial sweeteners, something most experts recommend children consume in limited amounts. 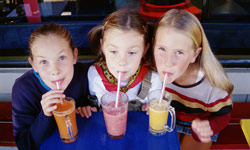 Smoothies made with syrups or added sugars aren't much healthier for you than your average milkshake.
Taxi/Getty Images

Smoothies may seem like the perfect drink for kids. It's real fruit that tastes more like a milkshake. But before you start divvying out the straws, beware: Some smoothies can be real gut-busters, topping out at more than 700 milligrams of sodium. There's nothing healthful about that. Although some smoothies are made from skim milk or yogurt and fruit, you'll want to keep these ingredients off the menu: sweetened syrups, ice cream, peanut butter and chocolate. Otherwise, what your kids are sipping may just put a double cheeseburger to shame.