by Alison Cooper
Prev NEXT
5 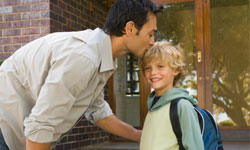 You know how you like to send your kids off to school with a warm embrace -- well come high school, you can kiss that PDA goodbye.
Pixland/Thinkstock

You might think that, as academic and athletic demands increase in high school, so might parent involvement. After all, this is a critical time in your child's life -- pretty soon, they fly the coop, never to be seen again. But you'd be thinking wrong: Parent involvement actually decreases during the high school years. One reason is that high schools often don't court parent involvement as much as elementary and middle schools do -- it's just a more hands-off type of environment. Parents also commonly assume that their contributions aren't needed as much because kids are older and more responsible. Not so. Many studies have shown that parental involvement is a major factor in their children's success. So go ahead and volunteer -- your kids might be embarrassed to have you around, but it's for their own good.