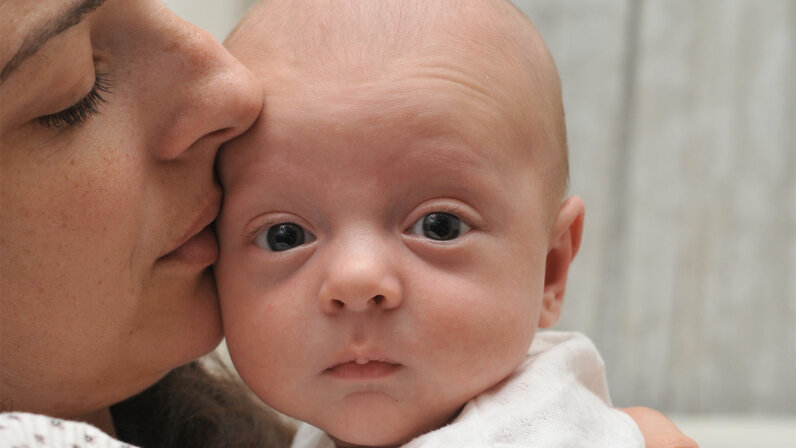 Moms know there’s nothing like the scent of a brand-new baby. Jade and Bertrand Maitre/Getty Images

It's nearly impossible to describe the scent of a newborn baby – especially since each baby seems to have his or her own – but if you've ever gotten up close to a newborn and inhaled deeply, you know exactly what we're talking about. It's not just baby shampoo and dirty diapers, either; in most cases, you won't even be able to identify exactly what it is. And then one day, it's just gone – often without your even realizing it's been fading. So what exactly is that "new baby smell?"

No one is exactly sure. A 2012 study did find evidence of "old people smell" – as CNN put it, "a recognizable body odor that can't be fully explained by grooming, diet, or other environmental quirks." One of the study's authors theorized that a smell related to a certain age group may be an evolutionary relic designed to help humans choose their mates. So it's not impossible that babies might also have a scent of their own – thought not so much for mating purposes.

That new baby smell could also serve an evolutionary purpose – for example, to help a mother identify her baby more easily, similar to how babies can identify their mothers by smell almost immediately. Several studies have shown that most mothers can identify their babies by smell alone. It may also help a woman bond to her baby. A 2013 study from Frontiers in Psychology found that when women were given an undershirt with a baby's scent on it (not their own baby's scent), their brains' reward center lit up. This was true whether or not the women were mothers themselves. It may have a benefit for fathers too. A 2008 study of marmoset monkeys showed that fathers who smelled their newborns showed a drop in testosterone, which could make them "more tolerant toward his infants while facing external challenges that might distract him from focusing on his infant and family needs," according to the study.

It's been suggested that new baby smell is really a combination of amniotic fluid, bacteria, breast milk, and other ingredients that you'd generally not look for in a sweet-smelling fragrance. (One scientist told the Washington Post it was a combination of 250 chemicals.) And since there are still so many questions about what it is and why it exists, recreating it exactly is, sad to say, pretty unlikely. So, the next time you open a box of old baby clothes and get a whiff of the familiar detergent, soap, powder, and fabric, don't be surprised if you're transported right back to those newborn days, able to conjure up your baby's scent from memory.