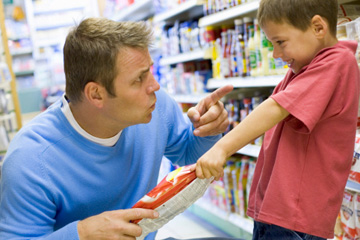 Set expectations before you go to the store.
TLC

Kids like to know what's going on just as much as you do; they like being prepared and informed. Set the ground rules before you go anywhere or do anything. Use this strategy when you can, and you'll see things go smoother with your kids.

Don't be surprised when your child protests, whines, or still comes up to you with a toy, explaining that he's always wanted this special LEGO Millennium Falcon, and if you get it for him today, he never will ask for anything again.

Your response needs to direct your child back to the original conversation about Simon's birthday and explain that you both had an agreement. You'll be in big trouble whenever you give in to the whining and the major fits. Your kids won't believe you the next time, if you tell them they can't buy anything and then give in and get them that one little toy. Buckling under the pressure only leads you to more tantrums because, obviously, the tantrums work.

Keep these pointers in mind to prevent tantrums:

If you have to put your child in a situation that isn't appropriate for his age, then giving him instructions beforehand is much easier than trying to set the rules while you're already involved in that activity. You end up saying, "Shhh-you-need-to-be-quiet," or, "No, you can't have anything," way too much. Instead, you'll be giving a few reminders of the rules you've already gone over.

Explaining things to children in advance works really well, too, especially when you're in a hurry: "We're going to the store for just a few minutes. Don't ask for anything." It may take awhile for them to believe that you really mean what you said, so they may go ahead and ask for something. But, don't give in, and eventually they'll get the idea.

Such planning works only when you don't give in to whining and change your mind about the rules. If you set rules but don't stick by them, you're in serious trouble. Your kids will always push you, whine, and throw fits whenever you go back on your word. This is a parental behavior that also is known as not being consistent.