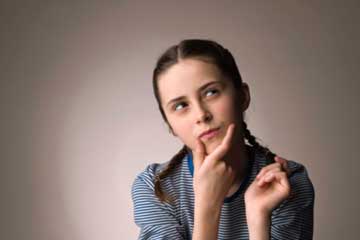 Deep Thoughts by Your Teenager: Be prepared when this stage shows up.
Polka Dot/Thinkstock

Hooray! Our child has reached the fourth stage in Piaget's theory, the formal operational stage. Now at about 11, she's mastering the final milestones in cognitive development. She has a full command of logic, and she's even able to manipulate abstract concepts in her mind. Hypothetical and ideological notions have started to take hold, so perhaps our little lady has taken a crack at contemplating the size of the universe or considering the trolley problem. She's also better at reflecting on the future, so maybe she's starting to think seriously about what she wants to do when she grows up.

Additional abilities are added to her cognitive skill set, such as:

There might be a brief shift back into egocentrism with a touch of idealism early on in this stage, but hey, that's puberty for you.

So now she's all grown-up and ready to dive into the world with her head screwed on straight. It's important to note, however, that it's likely not all of her peers managed this final leap. Studies have found that some 30 to 35 percent of people never make it to this last stage [sources: Huitt, Epstein]. So let's not take our girl's accomplishment for granted!

On the next page, you can consider some logic problems of your own -- from the psychological changes that happen during pregnancy to those that happen when you're lost in the woods, with the little dilemma of quantum suicide thrown in for good measure.