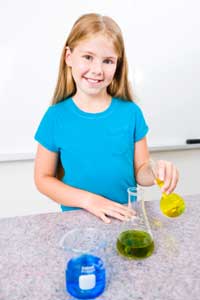 Now you're starting to get the hang of things, girl!
©iStockphoto.com/arsenik

When our child gets to be around 7 years old, she enters the concrete operational stage, expands her skill set and starts to gain a much greater command over language. As her cognition develops, she also gets a better handle on conscious logic when it comes to objects and events; she does, however, still have trouble with abstract thought. She also gets a lot less egocentric (thankfully -- we've been waiting for this to finally kick in!), and starts to understand that other people don't necessarily see things from her same point of view.

As she gets older, she starts to grasp what Piaget called conservation, and can see that objects don't always alter in terms of their fundamental existence even when a physical aspect about them changes. That is, using one of Piaget's experiments as an example, she realizes that when fluid in two identical glasses is poured into two separate containers of different shapes, there is still the same amount of fluid in each of the new containers.

There are several attributes of conservation, including number, substance, mass, volume and weight. She'll master these concepts at different times throughout this stage, realizing that things can have more than one dimension at the same time. She learns how to classify (group) and serialize (order) things as well. She can manage basic problem solving and understand that things can be reversed into their basic components and vice versa.

Kudos, kiddo. You're getting there. One last stage to go.