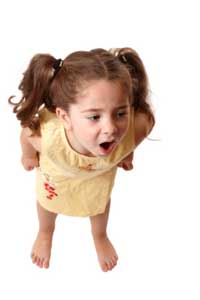 Do you get the impression your kid is constantly saying, "My way or the highway!" At this point, she probably is.
Hemera/Thinkstock

Once our child reaches about 2 years of age, she enters the second stage of development: the preoperational stage. She starts to really get a grasp on language, and to a certain extent, on symbols: She understands that objects can be identified by words and images, even when those objects aren't around. Memory and imagination gear up in tandem with this understanding of language and symbols, something which usually leads to extensive pretend play. Since she's still a little limited in her own experiences, such play often takes the form of role-playing scenarios imitating the actions of others. This symbolic play lets her understand more about what other people are doing around her.

However, she's still a bit simpleminded when it comes to separating things into categories. Seeing that an object can have more than one basic dimension to it at the same time is a challenge. Take playing with blocks. She wants all the blue blocks to be pushed into a pile together regardless of shape, but that causes a bit of a row with her play date, who pitches a fit because she wants all the circular blocks with the other circular blocks and the square blocks with the other square blocks, never mind what color they are. Each girl only sees the characteristic she cares about.

As you can see in the case of the argument over the blocks, children also tend to be bit egocentric at this stage -- that's because they aren't yet able to see things from other people's point of view. It stems from the fact that they've just begun to identify themselves as a person, separate and independent from the rest of the world, which consequently causes them to be very self-centered.

While our kid starts developing some intuitive logic, especially after age 4, she's still characteristically illogical in how she consciously perceives the world. We'll get into some of the areas in which our little test subject has to develop on the next page.