by Sarah Gleim Oct 12, 2017
A study found that new moms spent half as much time relaxing than their husbands. Noel Hendrickson/Getty Images

The year after North Carolina working mom Spencer (she asked that her full name not be used) had her first child, she says she could hardly leave the house. "After she was born, I didn't have a pedicure for a year because there was no going anywhere," she says. Her husband, who she says is a devoted father, just didn't really know what he was doing when his daughter was born, and that left her with the majority of the baby duties.

And apparently situations like Spencer's are not uncommon. A first-of-its-kind study released Oct. 9, 2017, from The Ohio State University and published online for the journal Sex Roles concluded that women pull most of the weight when it comes to caring for newborns and tending to housework, especially on non-workdays.

"I probably did 98 percent of the work when our first child was born," Spencer says. "Part of that was because [her husband] traveled, but even when he was here, I could only get him to change diapers. He wasn't the one getting up with her."

That inequality in child care and household duties, the small study found, was par for the course for the 52 couples who participated. The couples completed time diaries for workdays and non-workdays during the women's third trimesters through three months after the babies were born. No other study has had couples provide such detailed information about what they were doing on the same day at the same time. The research found that when the babies were around 3 months old, dads were more likely to spend their days off work relaxing 46 percent of the time while moms did housework and took care of the babies.

But on days when men took charge of child care and housework, women spent just 16 percent of their time relaxing. The women were instead most often working around the house or helping out with the child. In fact, the moms in the study spent half as much time — 46 to 49 minutes — relaxing than their husbands, who spent about 101 minutes of downtime.

"It's frustrating. Household tasks and child care are still not being shared equally, even among couples who we expected would have more egalitarian views of how to share parenting duties," Claire Kamp Dush, lead author of the study and associate professor of human sciences at The Ohio State University, says in a statement.

North Carolina mom Spencer agrees and says her husband had no choice but to step up when their second child was born last year. "I still put [our daughter] Briant down to sleep, so he has to take care of the baby," she says. "A lot of the things he didn't do with Briant, he has had to do with the baby. When I was still nursing, he had to take her to parties, and he's had to change more diapers, too. Some of it is a comfort level thing, but some of it is necessity."

Not all of the findings were bad for dads, though. The times the men in the study fell short during the nonworking days, they made up during the workdays.

"On workdays, parents are more evenly splitting housework and child care. It's very much 'all hands on deck' but when there is more time available on the weekend and parents are not so pressed to get everything done, then we see the emergence of gendered patterns and inequality where women do a lot more housework and child care while he leisures," study author Jill Yavorsky,assistant professor of sociology at the University of North Carolina at Charlotte, says in a statement.

Dush says couples like those in the study, which consisted of mostly highly educated, white, dual-earner couples from the Columbus, Ohio area having their first child, are the ones she anticipated would share housework and child care equally.

"I was expecting to see a lot more minutes where the couple was doing some kind of housework or child care together," she says. "I suspect the situation may be even less equitable for women who don't have all the advantages of the couples in our sample."

Spencer says she and her husband do share responsibilities during the workweek but they're still not quite 50/50. "This has been a four-year conversation," she says. "The first thing moms think about is the kids and what always needs to get done. I think the man just thinks the mom will take care of it."

Now That's Interesting
According to a 2015 Pew Research study, dads spend about seven hours a week on child care. But that's triple the time they spent in 1965. And the nine hours a week they said they spend on household chores? That's also increased — it was just four hours in 1965.

People Sleep More Soundly With Their Dogs in the Bedroom ... With One Exception 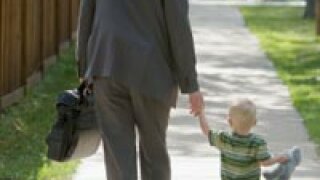 What are the advantages of both parents working? 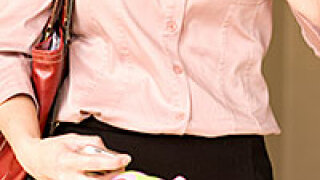 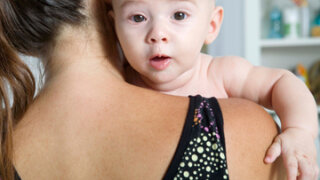 5 Things to Know About Adjusting to Parenthood