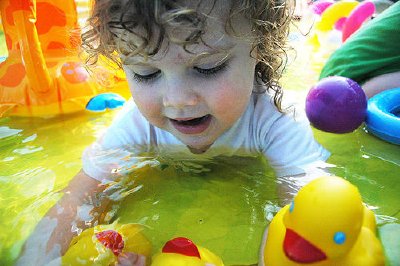 Whether or not videos for babies and toddlers actually increase a child's learning potential has been a source of much debate among child development specialists.

According to Walter Gilliam of Yale University, there haven't been any credible studies that can tell parents about these videos' positive impact on young children. "Although it is possible that these videos may be of some use for facilitating infant development, it is just as possible that they do nothing at all or are even detrimental," he said. "Without credible data on their effectiveness, marketing these infant and toddler videos as 'educational' or 'cognitively stimulating' is misleading, at best."

Dr. Dorothy Singer, senior research scientist at Yale University, also questioned the value of these videos' developmental content. "Very young children do not have the language capacity to tell us what they learned," she said. "All we can say is that for some babies, the videos may be holding their attention on screen, but as far as actual learning taking place, we do not know for certain."

While the research may be inconclusive, some experts believe that higher-quality videos can serve a purpose -- when viewed along with the child. Claire Lerner noted examples of developmental videos that set themselves apart. "The better videos try to create content on what we do know about child development," she said. "For example ... we know [babies and toddlers] don't understand stories but like to see familiar objects and people. A video depicting these things is something they might relate to."

Dr. Helen Boehm, a child development specialist and the author of The Official Guide to the Right Toys, looks upon developmental videos as useful learning tools -- as long as they are supplemented with other ways of teaching children about the world around them. "Introducing developmental videos, like other age-appropriate toys, engages babies in the learning process," she said. "It's important, however, that this mix include a variety of visual, auditory, tactile, active, and quiet play opportunities. A heavy or steady diet of videos or child-directed media is never advised."

The Downside of Child Development Videos

While some parents feel that these videos expose their child to music, language, and a variety of other mediums, several early-learning specialists are concerned that parents might rely too heavily on them.

Singer notes that infants watching these videos at six months or younger become accustomed to passive viewing at an early age. Instead, she said, "Babies and toddlers should be playing with toys and exploring them -- touching, seeing, smelling, listening -- not just looking at videos."

Learning through viewing is limited, Lerner said, pointing to recent studies that prove a child can imitate an action when it is demonstrated to him or her in real life as opposed to on screen.

According to the American Academy of Pediatrics, children under the age of two should have no media exposure whatsoever, while kids ages two and up should be limited to two hours per day. Dr. Ari Brown, a pediatrician based in Austin, Texas, and a spokesperson for the American Academy of Pediatrics, said the reason for these restrictions is that increased viewing is correlated with a decrease in socialization. "Even if the media is considered 'educational,' it is still a passive form of learning compared to sitting down with a parent doing a one-on-one activity."

This type of interaction is the best way for a child of any age to begin to understand about the world around him. "We know that infants and toddlers learn most, fastest, and best through rich interactions with caring and sensitive adults," Gilliam said.

Dr. Steveanne Auerbach (a.k.a. Dr. Toy), a toy industry pundit, also noted the added benefit of socialization. "There can be too much dependency on mechanical stimulation [with videos]," she said. "Babies still need that live connection with their parents."

Vicky Rideout, vice president and director of The Kaiser Foundation's program for the Study of Entertainment Media and Health, points to the widely known idea of a child's early years being critical in terms of the brain's growth and development, and that passive viewing doesn't lend itself to active learning. "What the child does during this period, how she spends her time and uses her brain, is very important. And since most experts say that they don't know what the impact of media use is, they think the safest bet is to avoid it."

For those parents whose children watch videos like "Baby Einstein," child development specialists offer their advice for suitable viewing in the next section.