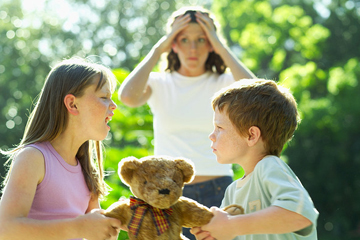 How far is too far? Set clear limits with consistent rules and discipline.
TLC

"You cannot have a cookie before dinner." "You need to stop at the corner before crossing the street." "Pulling the cat's whiskers is not acceptable."

A million times a day parents set limits with their children. While prior generations associated discipline with punishment, today we equate discipline with setting limits or educating kids about how to get along in the world.

When parents set limits, they are not only showing their children what to do and say, they are helping them to cope with their impulses and anxieties. Limits are internalized and actually make children feel safe. Therefore, it is important to start this process early.

As children grow they will naturally misbehave. They are adventurous, have strong impulses and need to feel independent. The challenge for parents is to work with these developmental issues in a positive and instructive way.

Here are some effective guidelines for setting limits with children of different ages.

Infants and toddlers are busy exploring the world. Everything excites them. Your curious 11-month-old will crawl over to the light socket repeatedly to see what it is all about, or jettison food over the side of his tray table to study gravity. At this stage your child is ecstatic about his new physical skills, such as walking and climbing.

At 15 months old, your child is constantly in motion and it will be hard for him to stop. Children in this age group are also egocentric. They experience their wishes and needs as urgent. When you are standing at the checkout counter, your two-year-old's wish for a new toy will feel like life and death to him, so it will be hard for him to let go. Infants and toddlers are impulsive. They lack the ability to express their needs and desires verbally, so they act them out.

Your 18-month-old, for instance, will grab a bag of potato chips from the supermarket shelf or engage in a tug of war over another child's shovel. And when he is angry he might hit, kick or bite. (This behavior is similar to the way a tiny infant thrashes around when he is frustrated.)

Babies are not born with social skills. That is why infants and toddlers have a hard time sharing (giving up a possession is experienced as a loss) or waiting their turn (they cannot tolerate delayed gratification). Your 2-year-old is developing a sense of self, so she will try hard to assert her independence from you. Therefore, at times she will fight you tooth and nail over brushing her teeth or going to the potty.

During these early years, it is crucial to set limits with your child to keep him safe and to teach him important social and emotional skills. At the same time, you must give your child room to explore the world.

Newborn to 2 Years Old: What Works

Preschoolers have a major love affair with life. They are enthralled with their new skills and growing independence. By the time children are 3, 4 or 5, they can dress themselves and even prepare their own bowl of cereal. Their cognitive abilities are simply blossoming and many older preschoolers can count and write their names.

At this age they ponder deep philosophic issues, such as birth and death, and have more highly developed language skills. They can communicate about their desires in a more sophisticated way, so they are less impulsive than during the toddler years. However, they will still have tantrums when they want something badly or things are not going their way. Preschoolers are much more in touch with their emotions than toddlers. Your 4-year-old can say, "I'm angry," at times, rather than hit or throw things. However, when stressed, your 3-, 4- or 5-year-old will still regress to these earlier forms of behavior.

Children at this age have a better comprehension of cause and effect. They can reason and negotiate better, so they can be more cooperative. Your 3-year-old will be more accepting than he was at 2 when you explain, "You can't go to the park today. It's raining." Though preschoolers continue to be egocentric and experience their needs as urgent, they have developed some tolerance for delayed gratification. If you tell your 4-year-old, "You can have some juice when we get home," he will be more capable of waiting than he was when he was younger.

Social skills are blossoming during this stage of your child's development. Sometimes your 4-year-old will be able to share her toys with a playmate or wait her turn, but there will be times when these skills will simply evaporate. Preschoolers have internalized many important rules by now. For instance, they know they should not run into the street when their ball rolls off the sidewalk. But their self-control is still very immature, so they will still run after the ball. They are also outgoing and feel invincible at this age. Your 4 1/2-year-old will enjoy telling strangers all about her new fish, or she might climb up on the windowsill and try to fly like Superman. Therefore, you need to supervise your child carefully.

Preschoolers need to learn how to behave appropriately and gain greater self-control. Here are some suggestions for setting constructive limits with this age group.

Children in this age group act much more mature. Their intellectual, emotional and social abilities are expanding by leaps and bounds. The fact that they often look and act like little grown-ups often masks the reality that they are still very young. Though school-aged children have a greater awareness of how to behave appropriately in situations, their behavior will fluctuate. Sometimes your 8-year-old will be capable of sitting quietly in a restaurant and using perfect manners, but when she is tired, bored or stressed, she will revert to more immature behavior.

School-aged children have better impulse control than they did when they were younger. When his younger brother scribbles on his homework, your 9-year-old son will be more capable of telling you he's angry than to retaliate and hurt his brother. At this point, children know how to verbalize their desires and can negotiate solutions in a more sophisticated way. For instance, when your child wants a new Game Boy cartridge and you tell him it is too expensive, he might suggest that he contribute some money from his allowance. His ability to accept disappointment has also improved, but do not be surprised if he still whines, throws tantrums or kicks the dog when he does not get what he wants.

At this stage, children have more highly developed social skills. They have a greater capacity for sharing and showing empathy. However, they still have a lot of trouble accepting defeat when they lose a game. School-aged children face many new social challenges for which they are unprepared. They are often excluded, bullied or overwhelmed by peer pressure and lack the skills to assert themselves. It is not uncommon for children to take out their social frustrations by being aggressive or oppositional at home.

One of the most powerful developmental issues for this age group is the need to assert their independence. Even though your 10-year-old knows that she must come straight home after school, and has internalized many other rules, she will ignore them at times to prove that she can make her own decisions. She will constantly push the envelope and pressure you for more privileges. She will lobby to stay home alone, go to sleep later or see a movie with her friends. Your child is speeding toward adolescence.

Setting limits with this age group is tricky. Here are some effective techniques to keep them safe, while offering them more opportunities to be independent:

Be Patient and Consistent

It takes children a very long time to learn how to control their impulses, follow the rules and relate appropriately to others. You will need to be patient and repeat the rules over and over again. If you set limits with your child in a consistent, positive way, eventually your child will internalize your expectations. These guidelines will help him to get along successfully in life.