What are my co-parenting rights?

Browse the article What are my co-parenting rights? 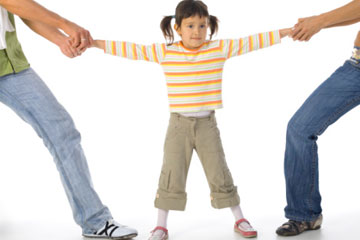 There's no need to play tug-of-war with your toddler. Knowing your rights can help you make a co-parenting plan. See more parenting pictures.
Hemera/Thinkstock

Many couples today continue to share responsibility for raising children after a divorce or separation. The arrangement is referred to as co-parenting or shared parenting. Your rights as a co-parent are spelled out in a divorce decree or a parenting agreement approved by the court.

To understand your rights, it's important to consider two facets of child custody -- physical custody and legal custody. Where will the children live? Who will make important decisions for and about the children?

The answers to these questions will define whether one parent will exercise sole custody or whether the parents will share joint custody. Often, the arrangement is mixed [source: Nolo]. One parent (known as the custodial parent) may have sole physical custody, but the parents exercise joint legal custody, making decisions together. Or they could share physical and legal custody, with the child moving back and forth between them. A non-custodial parent typically has visitation rights.

Though a court will ultimately approve the arrangement, the custody process need not involve litigation. In many cases, the rights of parents are spelled out in a parenting agreement drawn up by the parents themselves [source: Bennett]. They may decide the best arrangement together, or, in cases of conflict, they may use the services of a professional mediator. If they work out a plan that the court approves, the parenting agreement takes the force of a legal decree. If parents can reach no agreement, the court will impose the terms.

The parenting agreement is critical in determining your rights as a co-parent. It should take into account a number of issues [source: Lawyers.com]:

All of these concerns should be addressed in specific detail. For example, the times and duration of visits need to be scheduled to minimize misunderstandings.

Visitation rights are a frequent source of conflict in co-parenting arrangements. Both parents should recognize that the schedule of visitation cannot be altered by the custodial parent acting alone but needs mutual agreement or the court's approval. Failure to abide by the parenting agreement can lead to a charge of contempt of court. The noncustodial parent must understand that violations of visitation rights do not affect obligations to continue child support payments [source: Lawyers.com].

Now, let's look at some specific co-parenting laws and how they differ by state.

Two trends are having an impact on the rights of co-parents. The first is that the laws and courts of most states now prefer and encourage joint custody whenever possible. The second trend is toward equality of mothers and fathers in custody decrees. In past decades, courts generally awarded custody to mothers, but many states now forbid preference based on the gender of married parents. Almost all co-parenting decisions are now based on "the best interests of the child" [source: Lawyers.com].

Does this mean that the child's wishes are taken into account? That depends largely on the child's age and level of maturity. Young children usually have little say in the matter. However, the preferences of older children can be an important factor in awarding custody and working out other details [source: ABA Family Legal Guide].

Laws governing co-parents' rights are drawn up by the states. A lawyer can advise you about specific laws in your state. Some examples of various state laws are:

What happens if the custodial parent wants to move? If the move is to another city or state, how can the noncustodial parent maintain visitation rights? There is no easy answer to this thorny issue. Some parenting agreements detail what will happen in the event of relocation or set limits on the custodial parent's moves. Some states define a move of a specific distance to be significant. The reason for the move is also an important factor. Courts can deny permission if a move is not in the best interest of the child [source: Lawyers.com].

The rights of parties other than married parents is another factor in co-parenting. For example, what rights does an unmarried father have to his children? In most cases, courts will favor the mother if the parents never married [source: FindLaw]. Grandparents can assert visitation rights in most states and may ask for custody. The custody rights of same-sex couples is an area undergoing change and clarification in some states.

Co-parenting can be a complicated arrangement. To arm yourself with even more information, investigate the links on the following page.

Co-parents face a tough and complex task. That's why more states and courts are requiring separating parents to take classes or workshops that teach them about co-parenting. The sessions help parents recognize and resolve issues and avoid the pitfalls of the process. In Virginia, for example, such classes are mandatory for any parent involved in a custody, visitation or support dispute [source: Baron].