What are the child development milestones? 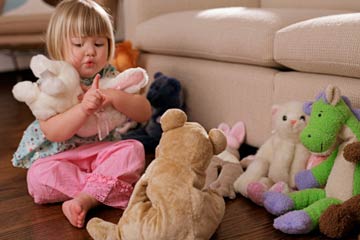 By the time your child is 2, she should be able to speak about 50 words. Though you might not understand all of them, her stuffed animals might.
Liz Banfield/Getty Images

Language milestones involve more than the number of words a child can speak. It's also about comprehending speech and using and understanding facial expressions and body language. Communication begins very early.

At 3 months, your child should be giggling and cooing. As mentioned earlier, she also may be smiling at familiar voices. That's cognitive development, certainly, but it's connected to language as well. She communicates what she has learned: Someone she likes is around.

By the time she is 7 months old, she should respond to her name and may start to acknowledge "no." (Then again, just because she understands, "No, don't eat the cookie," doesn't necessarily mean she won't do it anyway.) She will probably babble syllables in strings rather than as isolated sounds. But the babbling should be expressive -- you'll know whether she's happy or sad.

At 1 year old, parents will experience another delight: She should begin regularly calling to them, generally with the common terms "mama" and "dada." On the other hand, she'll probably use gestures for "no," such as an emphatic headshake signifying, "No, I don't want those mushy peas!"

In another year, she should be able to verbalize at least 50 words, and parents will usually understand at least half of them. She may put two words together, often to make her desires known: "Daddy, up!" or "No bed!"

Beyond early childhood, it's primarily a matter of more and better:

From the first coo to a book report on "War and Peace," language development is fast and furious. Much of that language expression and reception takes place in social settings, so let's check out social and emotional developmental milestones next.