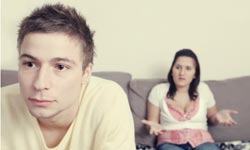 Nagging will only get you so far.
iStockphoto/Thinkstock

Nagging works. At least in the short term. Turns out continually pestering your sweetie to take out the garbage or do the dishes leaves him too emotionally exhausted to argue, at least according to a study reported in Britain's "Daily Mail." Nearly half the men simply give in to their wives' requests after an hour or so of nagging, and a whopping 83 percent believed their partners were right to nag them.

All those verbal requests (and complaints) may become second nature to you, but to your intended target, they're annoying, even if they are surprisingly effective. The real downside, however, is the effect of breeding such resentment. More than 90 percent of the couples who criticize each other in a non-constructive way divorce within 10 years, according to researchers at the University of Utah.

However, there are much more effective approaches than taking a passively aggressive stance. What else works? One simple strategy is to ask. Making a request is even more effective than nagging -- especially when it's not done as a complaint. We've got all sorts of other strategies, too, next.