5 Things You Should Know: When Mom's the Breadwinner

Browse the article 5 Things You Should Know: When Mom's the Breadwinner 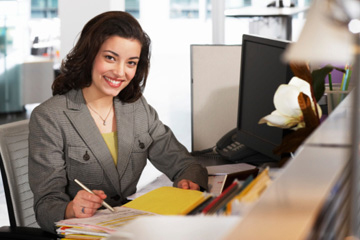 These days, it's not unusual for mom to be the primary breadwinner in the household.
TLC

In the 1970s, America was introduced to the Enjoli Perfume woman. She could "bring home the bacon, fry it up in the pan and never let you forget you're a man!" More than thirty years later, moms all over the country are bringing home the bacon and frying it up on the pan (and we'll reserve comment on the last part of that jingle.)

There are a couple types of families with female breadwinners out there: families with dual-earning couples where the female happens to bring home more bacon, families where couples have opted for the dad to stay at home with the kids (SAHDs), and those who have fallen into the role due to economic conditions, unemployment or other reasons. Being the primary wage earner can be both empowering and frustrating, and here we'll look at some of the things that can come up when mom's the Enjoli woman.

Moms are notorious worriers. We feel guilty at work that we're spending time with family, and vice versa. Are we doing the right thing for our kids, our spouses, ourselves and our career? No woman is doing this alone, and it's time to ditch the guilt.

According to U.S. Census reports, more than one million families with children under 18 are supported by mom. It's hard, though, to pinpoint how many dual-earner families are out there where mom pulls down the higher salary. Women's eNews reports that in 2007 there were more than 4 million families where mom was the main breadwinner, double the number of breadwinning moms since 1990. Who says Mom is doing something wrong when she's supporting her family?

We're all guilty of not spending time in the moment. When we're working, we're often thinking of all the things we should, could and would do with our family this weekend. At home, we let work and "real life" project task lists run through our heads. By doing so, we're not maximizing our time spent in either camp.

Also remember it's not a sin to say no -- at work or at home. Do you really have time to finish that PowerPoint presentation for your boss, drive the kids to and from piano lessons and soccer games while also volunteering to chaperone a class field trip? Learning to say no can help avoid being spread too thin.

Whether we agree with it or not, eyebrows often rise when the man is not the family provider, and watch out if he decides to stay home with the kids. "Leave It To Beaver" style gender roles have long been engrained in our culture, and can rear their ugly heads when mom becomes the primary breadwinner -- sometimes within the breadwinning mom's own family.

In a survey done by ELLE magazine, 16 percent of female breadwinners insist that men should always be the primary earners. Couple that with this statistic: According to Heather Boushey, senior economist at the Center for American Progress, the unemployment rate in December, 2008 was 7.2 percent for men and 5.9 percent for women. Gender roles, expectations that wives stay home to care for families and our own egos can sometimes combine to create relationship tension, resentment and stress.

According to 2008 U.S. Census statistics, women bring home 77.8 cents for every dollar a male co-worker earns.

Just because mom's the breadwinner doesn't mean that dad is the default primary caregiver for the kids. Many dads these days work from home full-time. For some stay-at-home dads (SAHDs), daycare or sharing responsibilities with a grandparent might still be a better option.

Some stay-at-home dads (SAHDs) really get into the primary caregiver role - for them, it's just a way of life. Plus, there are many resources these days for SAHDs, including at-home-dad newsletters, mailing lists, bulletin boards, chat rooms, support groups, and even an SAHD convention.

Bringing home the bacon (frying it up in the pan optional) can be a mixed financial blessing. Breadwinning women are more likely than other women to equate money with relationship power. And that may lead to tension, both financial and within the relationship.

A 2008 ELLE magazine survey found that 1 out of 3 female breadwinners resented paying for shared expenses. It also reported that when the pulled in a salary of $50,000 or less, his female, breadwinning counterpart reported that their sex life and overall relationship took a nosedive. And this can further family trouble - especially in tougher economic times. In 2007, for example, men were hardest hit in layoffs: More than 80 percent of pink slips went to men.

So much for never letting him forget he's a man, Enjoli woman.