5 Things You Should Know: Dad-to-Dad Bonding

Browse the article 5 Things You Should Know: Dad-to-Dad Bonding 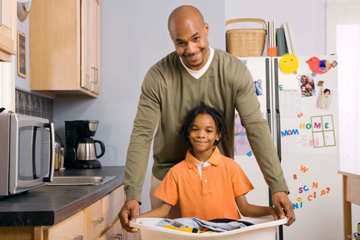 With dad-to-dad networking, you can share advice with other fathers.
TLC

In nearly every culture in the world, there's one social constant when it comes to parenting. Basically, mom's in charge of the kids. Certainly, there are nuances among cultures and even among families. For example, dad may play a starring role in one family, while he's a supporting character, at best, in another. As we progress further into the 21st century, however, fatherhood is becoming more important than ever.

It's easy to see why: More fathers are staying at home to raise the kids. While divorce rates have declined, it's still much more prevalent than it was several decades ago. In addition, because -- as the U.S. Census Bureau indicates -- more dads are receiving custody in divorce proceedings, single fatherhood is far more common than ever before.

Unfortunately, society hasn't entirely caught up with this change to a more active role among fathers. Parenting literature is still often geared toward mothers, leaving dads out in the cold. It's not like fathers can't use some advice, so more and more are turning to other dads for tips on raising children.

Here are a few places you can look for dad-to-dad networking.

Keep Your Eyes Peeled At the Ballpark

On any given Saturday, you can find dads congregated at parks and sports fields. Even in the dead of winter, you can likely find some dads watching their kids play hockey at a rink or on a pond. No matter the youth sport, if it's being played, there are likely some dads either watching, coaching or both. With the kids nearby and sports in the air, the ballpark is a perfect place to strike up a conversation about parenting.

If you're not a sports guy, don't worry. When you take your kids to the field and hit the sidelines, look around. You'll likely find someone who shares your passion for -- or tepid feelings toward -- sports. A shared interest (or lack thereof) in sports may reveal you have even more in common, such as parenting philosophies, than you thought.

Network Your Own Network

You know them very well: Your neighbors, guys at work, family members and your wife's friends' husbands. Dudes with kids are everywhere. Since you have kids of your own, you've likely established a go-to inner circle of other dads that you can call at the drop of a hat for parenting advice. Look a little harder, though, and you may find your inner circle grow ever wider.

We tend to get advice from people who assert their opinion to us or from those we know we can trust. Usually, the advisor relationships we develop with others aren't based on much forethought. That also means that there are potentially new and disparate points of view among people we know, but haven't ever sought advice from. Fellow dads who don't speak up much can still provide insight -- and arguably a different point of view from your more assertive friends.

If you pay a little extra attention to people you may have overlooked, you could find even more parenting advice.

Back in the day, a dad looking for parenting advice from other dads had a fairly small pool from which to draw. Since the advent of the Web, though, the advice pool available for dads seeking advice from other dads has grown exponentially wider and deeper. Forums, chat rooms, blogs and entire sites have cropped up to fill the void left by many traditional sources of parenting information that lack the details that fathers need.

The focus of sites you select can be as broad or as specific as you please. Make your Internet search equally broad or focused. Are you a single dad raising a disabled daughter? Are you just trying to get your son to eat his Brussels sprouts without resorting to brute force? There are others out there online who are dealing with the same situations you are. Taking the time to browse the Web can lead you to a global network of advice.

Get Creative and Be Spontaneous

It can be a bit intimidating to simply approach other guys and ask them how they handle parenting issues. It can be even more daunting when you're in the market for a trusted confidante and buddy. If you try it, though, you're likely to find that other dads are looking for advice themselves. Society is generally polite, remember, and you'll usually have no more than a brief, awkward conversation with a stranger.

If you're confident enough to strike up conversations with other dads about parenting, you'll begin to notice other dads are everywhere. Every outing is a chance to find advice and network with other fathers. Even better, your kids will enjoy being brought along to places like museums, the movies or wherever else you're hunting for advice from other dads.

Check out Meetings and Groups

If you have trouble approaching people you don't know, that's okay. Not everyone feels comfortable with that. This is why there are groups. Meetings held in physical spaces can be far more comforting than chatting on the Internet.

However, you might want to begin your search for a group for dads on the Web. Why? You may be surprised to find how many fellow fathers in your area need help. In other words, you'll probably find you're not the only imperfect dad in town.