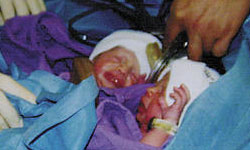 Would you trust a complete stranger to carry and give birth to your own child? Plenty of people have said yes -- by one estimate, about 25,000 couples in the United States have contracted surrogate mothers since 1976 [source: Colenso]. That's a relatively small number, to be sure, but it's growing, thanks to advances in technology and the increasing legalization of (and acceptance of) gay marriage. The vast majority of surrogacy cases happen with no fanfare: The baby's healthy, money is exchanged (or not), "mom" stays in touch (or not) and maybe has a baby for another couple somewhere down the line.

When a surrogacy case does make news, though, it's all too often for the wrong reasons -- anyone out there old enough to remember Baby M? It's hardly surprising that some surrogate mothers, even after signing a contract, suddenly decide that they can't give up the babies they just carried for nine months, and this is obviously a heartbreaking scenario. But every once in a while, you do hear something incredible. Surprise quintuplets (and the surrogate declines her fee!). A woman gives birth to her own grandchildren (triplets!). We've compiled a list of the five most amazing surrogacy stories out there.

Given the intimate nature of surrogacy, you'd think it would be fairly common for the experience to be shared within families -- for sisters to give birth for sisters, for example. But, for whatever reason, it's actually far more common for couples to use strangers as surrogates. Not so for Jo and Paul Coomb, a British couple who had gone through 10 rounds of in vitro fertilization and two miscarriages over 10 years of trying to conceive. Their sister-in-law, Caroline Jones, offered to carry a baby for them -- and after one ectopic pregnancy that used up the last of the frozen embryos from the IVF cycles, Caroline got pregnant using her own eggs and Paul's sperm. The Coombs's son, Charlie, was born on March 30, 2009. 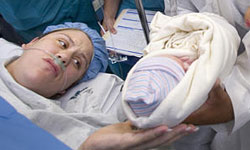 Teresa Anderson knew that agreeing to be a surrogate mother for Luisa Gonzalez and Enrique Moreno was a serious undertaking. It obviously isn't easy to carry a child for nine months and then have to give the baby up, no matter how mentally prepared you are. But no one had any idea exactly how risky this task would turn out to be -- Anderson, as it turned out, got pregnant with quintuplets. On April 26, 2005, she delivered five boys -- more than 18 pounds of babies -- apparently making her the first surrogate mother to give birth to quintuplets. Even more amazingly, she declined her $15,000 fee, saying that Gonzalez and Moreno would need the money more than she would.

In 2004, Tina Cade gave birth to her own grandchildren. Yes, you read that right. The 55-year-old (postmenopausal!) Virginia woman shocked everyone -- including herself -- when she came up with the idea to be a surrogate for her daughter, who suffers from endometriosis and had been trying to get pregnant for four years. "We were just completely flabbergasted," said her son-in-law. Cade then underwent in vitro fertilization -- and the next shock came when the family realized that she would be carrying not one, but three babies. After a relatively uncomplicated pregnancy and C-section delivery, Cade went on to establish a foundation that helps other families deal with infertility. Now that's what we call motherly love.

The Price of Surrogacy

In October 2005, a Florida woman became the first cancer patient to have a child through a surrogate using her own frozen eggs.

It all started back in 1997 when Jennifer Rutansky -- then 26, single and going through a second bout with Hodgkin's lymphoma -- froze 13 of her eggs before going through chemotherapy, which she knew could leave her sterile.

The eggs were later fertilized with her husband's sperm, and the couple chose to go the surrogate route because Jennifer's uterus had been damaged by radiation treatments. Jacob Evan Rutansky was born in October 2005 -- as it happened, just after his parents adopted a baby girl, Elizabeth. Sadly, though, Jennifer Rutansky succumbed to cancer in September 2010.

In 1986, Mary Beth Whitehead, who had signed a contract to carry a baby for William and Elizabeth Stern (using her egg and William Stern's sperm), gave birth to a baby girl, but then refused to surrender the baby and fled the state. After a long and heavily publicized trial, Whitehead's parental rights were revoked and Elizabeth Stern adopted the baby. But a year later, the adoption was invalidated and Whitehead won visitation rights. On her 18th birthday in 2004, Baby M (otherwise known as Melissa Stern) legally terminated Whitehead's parental rights.

Many surrogate mothers find that the experience is too physically and emotionally exhausting to even consider repeating. Some do go back for more, though -- but probably none as many times as one Welsh woman. Liz Stringer -- a single mother of two daughters -- has given birth to six surrogate babies, the last in 2010, at age 47. When she was 20, she vowed to try surrogacy when cervical cancer left a close friend infertile. Her first surrogacy experience finally came in 1997, when she carried a son for a couple who had been trying to get pregnant for 20 years. She's had five more since then, with no regrets (and no payment). "The huge emotional rush I feel seeing the parents' joy is what makes it addictive," she says [source: Carroll].

There's lots more information about surrogacy, pregnancy and fertility on the next page.

Surrogacy is legal in about a dozen states, but an equal number refuse to recognize surrogacy contracts. It's banned throughout much of Europe, too [source: Newsweek].

8 Tips for Surviving Stay-at-home Motherhood
What is the zone of proximal development?
How does having a teen parent affect the child?