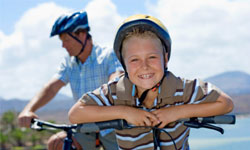 It can be easy to forget sometimes, but you're a role model. It doesn't matter what you do for a living, how much money you make or what your grades were in high school -- your son is looking to you to learn how to be a man. So, needless to say, you should try to set a good example. Spending some quality father-son bonding time is a great way to show him who you are and to build a better relationship with him.

To help the two of you get closer, we're giving you a list of five father-son bonding activities. We'll tell you where to go to have some guaranteed good times and what you can do to make his life a little easier. All of these activities are relatively inexpensive (if not free), and they should be fun regardless if you're close buddies or if you're so different you can't believe you share genes.

Which father-son activity can involve guns, cars, martial arts and pigskin, but is perfectly safe for both you and your son? Find out on the next page. 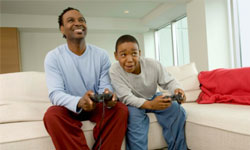 Video games will bring out the kid in you.
Jupiterimages/Thinkstock

Fragging each other in a deathmatch or swapping paint in a high-speed auto race may not seem like the best (or safest) way to bond with your boy, but as long as the two of you are stationed in front of the TV, murderous rampages and suicidal driving techniques can make for excellent father-son time.

Of course, you don't have to blow up each other or get behind the virtual wheel if you don't want to. You can play through an entire football season in the heat of the summer or practice your pixilated fighting skills if you'd like. If your son is too young for football games or martial arts (or you guys just want to play something a bit more relaxing), the two of you could hop into a pair of virtual overalls and save a kidnapped princess, or sling agitated birds at fortified pigs on your cell phone.

It doesn't matter what you play or how you play it, just spending time with your son in a comfortable and fun environment is going to bring you closer together.

Go to a Car Show

Guys like cars. It doesn't matter how old you are, where you grew up or what your socioeconomic status is; if you're male, chances are you have at least a passing interest in things with wheels and combustible engines. You can use man's inherent love of all things auto to connect with your son by taking him to a car show.

You don't even have to have similar tastes to spend quality bonding time with your boy at an auto show. Most new-model shows include a bit of everything, so if you love American muscle and he cares only for the high-end exotics, you're both in luck as you'll likely be perusing everything from the new Camaro to the latest Lamborghini.

If either of your interests run a bit more specific, it'll still be easy to find an auto show to meet your needs. Truck, SUV, motorcycle and RV get-togethers are not uncommon in most major cities, so it should be easy and affordable to bond over autos, regardless of the machines you choose to see.

If you don't live near a big city or the major car shows aren't frequent enough for your taste, try finding some local automobile meet-up clubs. It's easy to find brand-, model-, era- or year-specific groups that get together near your area; they'll likely be more than happy to show off their cars to the two of you.

Help With His Homework 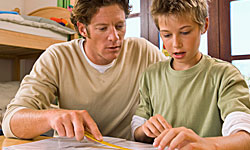 He'll respect you eternally if you can solve that equation.
Jupiterimages/Thinkstock

Doing homework may not seem like the greatest way to spend a Wednesday night, but it'll mean a lot to your kid. Not understanding an assignment or feeling left behind after a lesson can be extremely frustrating, so taking the time to go over his work and explaining complicated concepts to your son is more than just enjoyable father and son bonding time -- it's bettering his life. And don't worry if your algebra skills are a little rusty. You probably remember more than you think you do, and if the square root of X has both you and his mother drawing blanks, you can always call a tutor. He'll remember that you took the time to try. 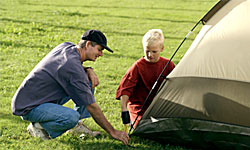 Camping is a great way to teach your son tricks of the outdoor trade.
Thinkstock

There's nothing like a couple of guys out on their own roughing it in the wild. Armed with nothing but your wits, a pair of sleeping bags, a tent and an ice chest full of meat and marshmallows, you and your son will abandon civilization for the weekend and depend on each other (and the campsite's bathroom) for survival. Of course, if it gets too cold or you encounter potentially hazardous wildlife -- such as bears or fire ants -- you can always go home, but no matter what happens, the two of you will have plenty of opportunity to talk, laugh and learn from each other.

Just be sure to bring extra s'mores fixings -- they tend to disappear pretty quickly whenever you mix campfires and father-son bonding.

Playing catch is a time-honored activity that every father and son should try. It doesn't matter if either one of you likes sports or can even throw and catch well. There's just something special about standing outside, tossing a ball back and forth with your son. The two of you can sit there for minutes or hours, talking about everything or nothing at all. It doesn't matter. Just spending that time together is what's important. You can do it anytime and just about anywhere, and even though playing catch won't cost you anything, the memories you'll make will be priceless.

There's nothing better than playing catch with your boy, but some dads tend to place too much emphasis on performance and skill. Overly critical commentary and pressure will ruin the activity for both of you, so drop your athletic expectations and just have a good time!