by Tristin Hopper
Prev NEXT
2

Keep Cool During Tantrums, but Stay in Charge 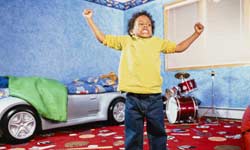 Many preschoolers tend to have tantrums as an outlet for their emotions.
Camille Tokerud/Getty Images

At times, tantrums may seem like your child has been possessed by an irrational spirit, but they are a common part of growing up. Preschoolers don't yet have the ability to control their emotions, and tantrums are sometimes their outlet for expressing themselves. Know how to manage tantrums when they happen, and your child should grow out of them by grade school.

You can stop many tantrums before they start. Preschoolers are hungry for independence, and they use tantrums as an outlet when they feel frustrated about a lack of control over their own lives. Give your child a sense of autonomy by giving him control over little things, like whether to have his juice before his snack, or the other way around. Preschoolers also have incredibly short attention spans. If you see a tantrum brewing, try to distract your child or move him to a different room.

Inevitably, however, tantrums will crop up. Each tantrum is different. If a child has failed at doing something, he may simply need comforting. If he is throwing a tantrum because you've refused him something, your best bet is to ignore him [source: Spock]. If the tantrum happens in a public place, whisk your preschooler off to quiet area where he can cool off.

Whatever you do, do not react to a tantrum by giving in. If your preschooler learns that tantrums are an effective way to get what he wants, you'll be facing many, many more tantrums.