10 Things Not to Say to a Pregnant Woman 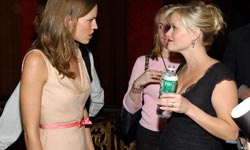 Let's hope Hilary Swank didn't put her foot in her mouth when she caught up with a pregnant Reese Witherspoon at a movie premiere back in 2003. See more pregnancy pictures.
Kevin Mazur Archive 1/WireImage/Getty Images

New life is a wonderful thing. It's only natural you'd want to share the joy with an obviously pregnant passerby. After all, as anyone with children can attest, parenting is an adventure that brings people together -- a common bond so powerful, so pervasive, that you may find yourself offering way-too-personal information the moment a burgeoning belly comes into view. However, some remarks are better left unsaid, especially if you're not in the expectant mother's inner circle.

If your unsolicited comments are met with a less-than-enthusiastic attitude by a mom-to-be, just remember: Between the morning sickness, swinging moods and looming delivery, few women relish advice from strangers -- or even (why can't they be distant?) relatives. So, the next time you start to open your mouth, try to steer clear of these 10 most-annoying observations.

"Are You Having Twins?"

Never. Ever. Tell a pregnant woman (who, by most odds, is carrying only one teensy little embryo) that she appears to incubating an entire litter. Not only are you inadvertently comparing her to a four-legged creature, but you also are commenting (and not very subtly) on her girth.

You should also steer clear of this related statement: "I'll bet you're due any day now." It's not possible to judge a due date by simply eyeballing a pregnant belly, so don't take your chances. Sure, the woman in question may be due today or tomorrow, but if her baby's not scheduled to appear for another month or two, you can imagine how welcome your observation must be. 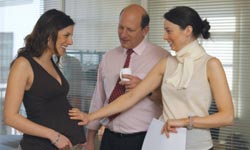 At least you asked. Did you know that most people don't? It's time to go against the grain and refrain from laying hands on burgeoning bellies. We know those taut tummies bursting with baby are tempting to rub, but moms-to-be are understandably protective. If you wouldn't walk up to a woman and rub her belly sans pregnancy, we're pretty sure you shouldn't be doing it if she is expecting. So don't be surprised if she tells you "no," blocks your hand or takes a step backward.

Don't get us wrong. Most pregnant women would be more than happy if you shared their joy. They'd just like you to do it without entering their restricted air space. Particularly if they barely know you.

"I Was In Labor Forever!"

Your labor may have been a 40-hour affair, rife with bloodletting and pain, but keep it to yourself. No pregnant woman, ever, really wants to hear your war story. We're already losing sleep over all the things that could go wrong with pregnancy and delivery, and we don't need your visual aids to add to the mix.

After all, the realities of labor are as close as docu-style television shows or that stack of books now populating our nightstands. What we need from you is probably more along the lines of, "You'll be fine." Same goes for episiotomies. There are just some things a pregnant woman doesn't want to know. 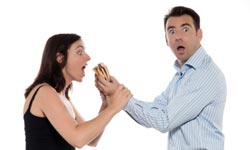 Who's the father? If you don't know, you don't her well enough to ask.
©iStockphoto/Thinkstock

Wow. Did you really not know this question was off-limits? If you'd like to avoid the half-eaten enchilada (or whatever snack happens to be at hand) surely being aimed at your head, steer clear of this lineage-based query. The truth is, if you're unsure who this baby's father is, you probably don't know her well enough to ask.

Of course, if a pregnant woman is in your circle of family and friends, you know exactly who the father is, and are simply making a joke. If she's a veritable stranger, we won't feel a bit sorry for you when that enchilada hits. The same goes for referring to the baby's father as the "baby daddy." Seriously?

"Was It a Surprise?"

There are plenty of surprises during pregnancy and delivery, such as suddenly wearing a larger shoe size or becoming a first-time acne sufferer. Even if the pregnancy itself was a bit of a shock, we're not prepared to discuss it with you, so stop asking whether it was planned.

The next time you ask a pregnant woman whether her baby-to-be is the result of carefully mitigated circumstances, take our advice: Just don't. Unless you'd like to be on the receiving end of a carefully culled comeback, like, "I see you've gained a little weight. Was that planned, too?"

"Aren't You Too Old For Kids?" 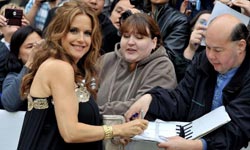 In 2010, 47-year-old actress Kelly Preston gave birth to a much-celebrated baby amidst "isn't-she-too-old-for-that" buzz. As any woman who's been able to legally vote for at least a decade can attest, there's no shortage of people who will wonder, aloud, whether we can handle such an undertaking at such advanced age. Such pondering, as with most comments related to pregnancy, should be kept on the down-low -- reserved only for catty conversations with your closest friends.

And, pregnant women, please refrain from self-effacing comments like, "I'm too old for this," when rattling off the bodily woes that inevitably accompany your impending bundle of joy. Chances are, the woman to whom you're commiserating is a) older than you are or b) was older than you during her last pregnancy.

"Better You Than Me."

Don't corner a pregnant woman at the market, office or playground, shake your head and say, "Better you than me." How does that celebrate her upcoming baby?

For many women, an impending arrival is the result of years of planning -- or about nine months of incubating, at least -- and she really is looking forward to being a mom. The fact that you seem to see the blessed event as little more than an arduous undertaking is a sly way of minimizing something that's oh-so-important. It's the mother of all backhanded compliments, and depending upon hormonal fluctuations, it could earn you the same.

"I Only Gained [Insert Ridiculous Number] Pounds When I Was Pregnant!" 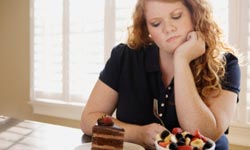 Pregnant women have enough issues with weight gain without anyone else chiming in.
Brand X Pictures/Jupiterimages/Thinkstock

It's not easy for a pregnant woman to feel pretty while sporting stretchy pants, so take it easy with your weight gain/loss comments. While it may be true (although we'd like to see proof) that you gained a sprightly 12 pounds (5 kilograms) while carrying your first, second or third child, keep this little nugget to yourself. At least until we've retired our pregnancy pants.

There is, however, one exception to this hard-and-fast rule: If you want to regale us with tales of how you gained a portly 80 pounds (36 kilograms) during your pregnancy and then spent a subsequent two years taking it off, that's one story we don't mind hearing.

We get it. Babies don't sleep all night. Still, we're not quite ready to hear all about the reality of your child's early days, what with you never sleeping and all. This is one time when it's fine (even admirable) to sugarcoat it.

So, the next time you're tempted to share a few tales about not sleeping through the night until after your child's third birthday, don't. We'll figure it out soon, enough. And, if we happen to birth a snoozer, one who sleeps a blissful midnight-to-6 shift, we promise to keep it to ourselves, too. We'd hate to be the source of a little parenting envy.

"Are You Disappointed It's a Boy?"

What's the point of asking? Can the mother send him back for another model? Truth is, how she feels about baby's gender is her business. She may be elated with what Nature gifted her. Or, she may have dreamed of a girl, gotten the opposite (or vice versa) and needs some time to mentally adjust.

So she may not feel like answering when family, friends or veritable strangers question her innermost feelings on the matter. And in the end, who's going to care when they see the perfect baby she'll be holding in her arms?