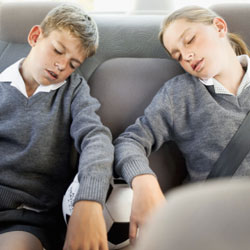 One whooshing sleep-inducer blast later and your back to enjoying your book on tape.
Stockbyte/Thinkstock

In the futuristic sci-fi thriller "The Fifth Element," spaceships have sleep inducers that put everyone to sleep until arrival at the destination. The system appears to be noninvasive and drug-free -- in short, utterly harmless.

It's unclear how it works, but there seems to be some sort of air-pressure release at the moment of sleep induction, identified by a distinct whooshing sound as Bruce Willis passes out. Like we said, we're not engineers, but inventors might want to start there. It's a definite whoosh.

Up next: You know what would make baby-proofing easier?