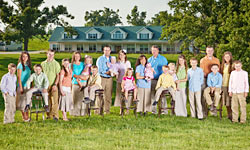 The Duggars of TLC's "19 Kids and Counting" with their entire family. Even if you don't have as many kids, you can use some of these parenting shortcuts.
Scott Enlow/TLC

The classic American memoir "Cheaper by the Dozen" centers on the hilarious 12-child Gilbreth family, whose father was a famous efficiency expert. He believed that his family could be run using some of the same principles he implemented in factories. While not everyone might agree with his methods, some of his shortcuts made sense for managing such a large brood.

Large families generally have to run more efficiently and learn to do more with less than smaller ones. They need bigger vehicles, have to put more food on the table and will be required to fold more towels. But large families do offer benefits too. As Michelle Duggar of the TLC show "19 Kids and Counting," puts it, "It is fun spending time with 19 of your best friends."

Exactly how many children constitute a large family is up for debate. Nowadays, a family with four or more kids is thought to be large; however, some rural communities consider six children to be typical, while some cultures feel two is too many.

Large or small, all families can benefit from a few tricks to keep their households running smoothly. Read on to learn some shortcuts that help parents raise a large family.