by Emilie Sennebogen
Prev NEXT
9 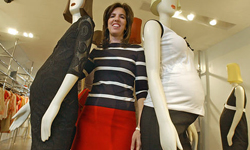 Liz Lange worked on staff in the fashion department at Vogue before leaving to work for a small designer. She noticed a void in the market for fashionable maternity wear and decided to do something about it. Lange opened her first store in 1997 and over the next decade, grew Liz Lange Maternity into a multi-million dollar brand. And did we mention she had two children during that time? Lange's strategy for managing her growing family along with her growing business meant focusing on the priorities at hand. She eliminated plugged-in parenting (no cell phones or e-mails) and stays present when she's with her family. But she still maintains a healthy respect for her Smartphone and attributes it to being able to juggle being a business owner and a mom.